What Jake Likes
The mobile over his crib. Every morning when he wakes up, he entertains himself by smiling at his mobile and chattering. This can go on for half an hour or more. Reminds me a little of his father, who babbles in his sleep. At any given point, you might find either of them lying in their respective beds, chattering away and making no sense whatsoever. Here's Jake's view of his favorite thing in life: 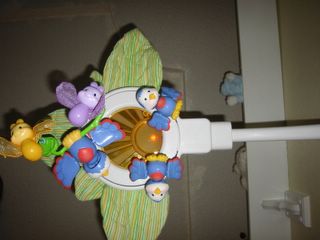 The blinds in our living room. Presumably it's the contrast of the light coming through them that attracts him. He can stare at the blinds, or the lights on the ceiling, or any other light, forever. When he first came home from the hospital, he refused to look us in the face no matter how diligently we bobbed in front of him; if we zigged, he'd zag, looking for a light to stare at instead of us. Now that he's a little older and his vision is a little more mature, he is interested in peoples' faces. Of course, by now, we're sick of looking at him. (Just kidding.)

The bouncy seat in the master bathroom. He is riveted by the light bulbs over the bathroom sink, so he can sit in his bouncy and gaze adoringly at those bulbs for an hour or so, breaking every so often to stare at the plastic fish swimming in the water at the front of his bouncy seat. Between the fish and the light bulbs, I practically have my own babysitter. I just have to come back in every so often to mop the drool up off his double chin. Here's Mr. Good Mood in said bouncy: 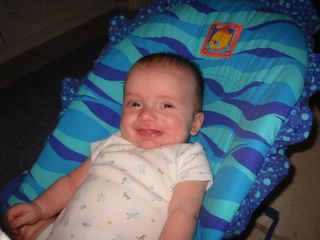 Staring at himself in the mirror. He must be aware of how goddamn cute his is, because he smiles every time he sees himself in a mirror. Mr. Vanity also likes it when I bathe him in the bathroom sink, so he can admire his supreme cuteness while I bathe him.


What Jake Hates
Tummy time. His doctor says he should be put on his tummy for a bit each day to strengthen his neck muscles. Jake tolerates this for a few minutes, then begins making little "eh, eh" grunting noises with a tinge of whine to them, as he thrashes his arms up and down like he's drowning. It's my job to take that cue and turn him over immediately, before he gets really pissed and and makes it his mission to punish me and my eardrums for the next hour. Here's what it looks like in the few minutes before Tummy Time goes bad: 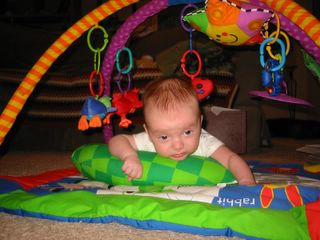 Me working out. Jake doesn't want one of those skinny waif moms who weighs about a hundred pounds and looks like she's fresh from a modeling shoot. He wants a mom with some meat on her bones. Or that's the impression I get every time I start to work out and he promptly goes from dead asleep to wide awake and ready for some play time. He can nap forever if I'm doing laundry or dishes or just about anything else, but as soon as I get about 4 minutes into a Pilates DVD, it's Jake Time.

Early evening, between 7-9 PM. Something about this time of day turns my sweet, lovable baby into Satan. He fidgets, he squeaks, he squalls. Ocassionally he howls. He wants neither pacifier nor bottle. He declines both the swing and the play gym. Many potential remedies run through my mind at such times: Tape his mouth shut? Put him in the garage? Drop him off at the bus station? However, I'm more interested in something that won't get me reported to Child Protective Services. I usually end up parading him around the house in my arms. He gets distracted from his screaming and gets caught up staring at everything as we pass from room to room. However, the moment I stop, it's game on again. See for yourself: 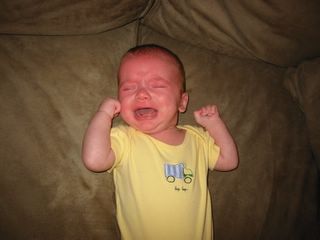 Being put in his car seat. Actually, he doesn't mind sitting in the seat, it's the two buckles that he hates. Once I get those snapped over his chest and tummy, he gets cranky. If I want to keep him quiet after that, I have stand up, hunch over and swing the carseat back and forth by one arm like I'm a gorilla. This only entertains him until I put the carseat into the car, though, and then the complaining starts up again. It's short-lived, however, because the moment the car goes into motion, he's out like a chubby little light. Here he is, still sacked out after a ride home in his car seat: 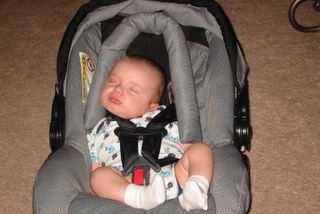 Staring at light bulbs can't be good for his delicate eyeballs, can it? Yikes.

BTW, you have the cutest little baby. What an angel.