Did I ever tell you about the time I was sexually assaulted by met Hoss, of Old Horsetail Snake? If you're a reader of his blog (and who isn't?) I bet you've bought into his portrayal of himself as some sweet old guy, hanging around the old folks home chatting up the nurses and cracking a joke or two. Forget that. The man's a cad, 100% pure evil.

He was passing through town on his way to visit his friend Tish (don't call her "Trish," or she'll gut you like a flounder), and would be at the Dallas/Fort Worth airport for a short layover. The plan was for me to meet him at his gate and have a nice visit with him before his connecting flight took off. There was no time to go anywhere for a meal or a cup of coffee, so we would just sit in the airport and chat each other up.

Little did I know what fate really had in store for me. 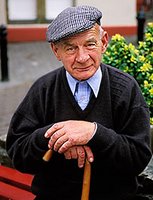 I showed up at his gate with an expectant smile on my face, looking this way and that for what I pictured him to be: A sweet older gentleman sitting politely, hands folded in his lap, giving an amiable nod to the travelers who passed by him. As I was scanning the area for someone who resembled the friendly-faced fellow in the cap pictured to the left in this paragraph, two hands grabbed my ass and I felt hot breath on my neck as someone growled, "Hey baby, you come here often?"

Naturally, I was shocked and outraged, and quickly spun around to slap the offender across the face, when I recognized him from the pictures I'd seen on his blog--it was Hoss! I immediately began to stammer and stutter, completely at a loss for how to respond to this incredibly inappropriate "greeting." He just smiled and swatted me on the tush again and said, "Yeah, I'm used to that. The ladies are often stunned at my good looks." True, he was dashing, as most villains are, but his bad-boy good looks were not enough to make up for his lecherous, depraved behavior. This man was just bad, through and through.

Oh, alright, I confess: This whole post has been a lie. Well, the part about meeting Hoss in the airport is true, and the part about him being dashing is true too, but the ass-grabbing bit was pure fabrication. He was every bit as sweet and charming as I expected, and a perfect gentleman, at that. He was just as smart and funny and kind as you'd assume from reading his blog. The truth hardly makes for edge-of-your seat reading, though, so sometimes I have to throw in a celebrity tabloid-style lie or two to keep you folks interested. 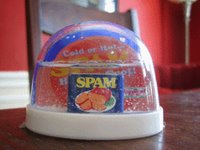 I doubt Hoss will be foolish enough to try to meet up with me again, though--I gave him a Spam snowglobe as a gift in the airport that day, and while that sort of thing is inexplicably hilarious to me, it just makes most people think I'm mentally challenged in some way. So unless he wants more questionable gifts heaped upon him, or another libelous blog post written about him, old Hoss will follow his gut instinct and stay far away from the Dallas/Fort Worth area in the future.
Posted by karla at 4:00 PM

Email ThisBlogThis!Share to TwitterShare to FacebookShare to Pinterest
Labels: I've been victimized

maybe y'all can go on a date to:
http://media.hormel.com/templates/knowledge/knowledge.asp?id=9&catitemid=16

I always thought Hoss was a Perv ;-)

Thanks for visiting my blog - I'll be back!!!

That was hilarious! I could almost believe Hoss would try to cop a feel.

You need to send one of those snowglobes to Corbin Bensen!

Have you seen the red paperclip blog?

MUST have the snow globe to go with the ducks in my bathroom.

Who doesn't love Hoss! He's awesome. Your second set of bloggers I'v read about this week that met at the Dallas/Ft. Worth airport. Great story. Stacie

You had me going there.
Love the snowglobe.
Love your blog.
Have a fab Sunday.

If it were me, I would've gone for your boobs. And trust me, you wouldn't have to embellish a thing!

Hi there...I just noticed you had visited my little blogpage....that was very nice of you. I love having "new" people dropping in.

And I do forgive you for cutting those power lines, I'll tell the local authorities---they thought it was a couple of transformers that got kicked by lightning that night. The truth shall prevail !!!

Gene sent me a picture of himself about a year ago (at least I think it was about then, when you're as old as I am time has no meaning) and like an idiot I deleted it. That was dumb. But typical for a senile old broad I suppose?

Anyway, I like the way you think. I'll be back. Gee Whiz -- If a man grabbed MY ass I would probably faint with joy and ecstasy, so enjoy it, girl. hahahahaha The old goats here at The Home leave a great deal to be desired....there's only one who has even a semblance of a nice butt. *sigh*

If I had known it would be okay, the story could have been true, since you got physical equipment just aching to be grabbed and jiggled.

And phooey on you -- but I will be passing through again (and again). There may be other tushes in need.

You're so bad! You had me saying "No fucking way" for no reason. Hoss rules!

Well next time around, you could always give him some nuclear Texas chili beans and a roll of toilet paper.

OMG! My sides ache from laughing!

First the story of Hoss (of course I know him - everyone knows him, don't they? LOL) was absolutely hilarious! I hope someday I get to meet him and grab HIS tush! LOL

Then the Spam snowglobe! Oh lordie! That is just....well, indescribable! LOL

I saw the red paper clip thing, and yes, I bet Corbin would love one like that!

Very nice post - thank you so much for sharing all of this!

I always figured Hoss and Latigo Flint were the same guy. Are you telling me they're not?

If so, who the hell is Kid Relish?

So, Hoss, does Karla need to do some ass-firming exercises, or what?

Maybe Hoss will come again and this time, he will really grab you ass! LOL.

Well, I was just in the DFW airport last week and where was my Spam snowglobe? Hmmphf.

See where tabloid-style lies get you?! Now he WANTS to make an honest woman out of you!

That snowglobe is hilarious...I guess that's something that's wrong with me, too.

Listen, if there's one thing the blog world needs it's a little more grab ass. I firmly stand behind that. (Yeah, puns!)

I've tried for months, years... to get Hoss to come visit me in St. Louis. No such luck. Not as nice of an ass to grab, I fear.

Come on, Spam is always cool, especially in a snow globe :O)

Hey, at least you managed to write about meeting another blogger. I met up with a fellow blogger a few weeks ago, and I STILL haven't written about it.

I loved the snow globe! Oh! and the story too.