A leash for my baby

Jake was born 6 weeks premature, which surprised everyone--I'd had an obscenely easy pregnancy with no problems at all, not even any nausea or mood swings. (Well, no problems unless you consider it a problem to morph into something the size of a cruise ship.)

Things were going so well that when I started feeling some pains in the depths of my colossal belly, I assumed they were just Braxton-Hicks contractions, the "false" ones you're supposed to get well before the actual labor contractions. I started getting them around noon at work, and although they were uncomfortable/painful, I figured there was no point in going home, where I'd presumably feel equally crappy but have nothing to take my mind off of it. So I worked til 6, as the contractions went from being kind of random to coming pretty steadily, about 30 minutes apart. When I got home I made pork chops and cleaned the house as they got closer together, and then I went to bed, where they got worse and closer together, keeping me from sleeping. (Actually it was probably the sound of my own voice moaning in pain that kept me from sleeping.) At 3 Am they were about five minutes apart, and here's where I finally had my genius revelation: I'm in labor. (I know, all you ladies who've been through this before are thinking I should have realized this about 200 contractions ago, but hey, I'm a first-timer, and maybe not too bright. Plus I have a fairly high tolerance for pain, added to the fact that my water didn't break like I was expecting it to.) I woke Brian up (no easy feat, let me tell you), and we went to the hospital, where incredulous delivery nurses mocked me for not realizing I had been in labor for hours. Jake was born about 4 hours later, and because he was premature, they whisked him immediately to the NICU, letting me take a one-second peek at him rather than hold him. Which, really, was fine with me; I felt like I'd been beaten with a meat tenderizing mallet, and was in no shape to cuddle, especially with Mr. Slimy Purple Yelling Thing. 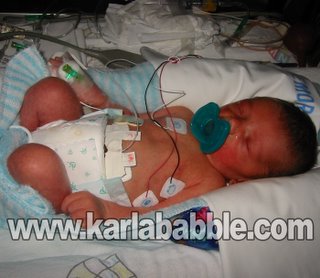 Jake stayed in the NICU for two weeks, although it didn't appear there was much wrong with him. He weighed 5 lbs. 7 oz., a good size for being so early. (I shudder to think how big he'd have been if I had carried him to term. As it was, it felt like I had pushed a Volkswagen out my hoo-ha.) They put him on oxygen for one day, and after that he had to lay under a bright light for several days to get rid of the jaundice that, if unchecked, might have made it look like he had a Muppet for a father. But otherwise, they mostly kept him there because he was a lazy eater. He would nod off in the middle of a meal like a heroin junkie, stubbornly ignoring their requirement that he consistently eat x amount of food in x amount of time before they'd release him. After a very frustrating two weeks of us begging him to just eat, for crying out loud, so we could take him home, the NICU doctors finally just gave up and released him to us in spite of his spotty performance. Because he was already on his way to becoming a smartass, he decided to start eating pefectly immediately after he was released--that very day, in fact--consuming the amount of food in the amount of time allotted. Little prankster.

He had, of course, been on a monitor while he was there, like all the babies, which kept track of his heart rate and breathing. When a baby's heart rate drops below a certain number, the monitor beeps and the nurse swoops in to pick the baby up or move him around to stimulate him and get his heart rate back up. Jake had a few instances in which his heart rate dropped, so they put him on elixophyllin, a central nervous system stimulant similar to caffeine. (Already taking after me; soon he'll be spending half his income at Starbucks, just like mommy.) They also put him on Zantac and Reglan for acid reflux. As a precaution, they sent him home on a monitor, a less complex and more portable version of the monitor they had him on in the NICU. It was about the size of a cereal box, and came with a purse-like bag you could sling over your shoulder while toting the baby around. A chord ran from the monitor to electrodes on Jake's chest, snaking out of the bottom of his onesie and looking a lot like a leash. 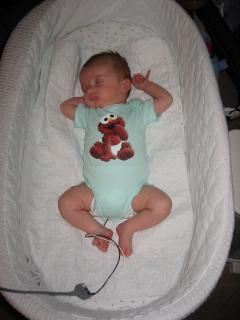 He had to stay on the monitor for 3 months, during which time there were several madcap incidents in which one of us would pick up the baby and start to walk off, only to be yanked back by the leash. Anyone wanting to hold Jake was basically tethered to his basinette. It felt a lot like when you ask to use the bathroom at a gas station, and they hand you a key attached to a wire with a wooden block anchoring it on the other end.

So now the leash is off, and we have what passes for a normal baby. Although when he starts crawling I may wish I had the leash back.
Posted by karla at 12:36 PM

This is really a wonderful account of what you had to go through to bring Mr. Slimy Purple Yelling Thing into this world. It's amazing how strong you were through the pregnancy and I still can't believe that you had been in labor all day and still cooked pork chops! I remember jumping right out of bed with a stunned look on my face, but it probably seemed like I was moving in slow motion to you.

FANTASIC blog. I don't have children, but yours makes me look forward to having my own slimy purple yelling thing :)

So, have you done much research into infant cognitive development? I mean, at this point in his life, how smart do you think Jake is? Smarter than a fish? How about a dog? Not like a puppy, I mean one of those really seasoned dogs, maybe like a golden retriever that's past his prime but he's still tough as nails and he knows alot about how the streets work and he's just hoping to make it retirement before he gets gunned down by a drug dealer who he put behind bars a long time ago, when he was just a rookie.

Do you think Jake is that smart?

Good question, Brooks. I haven't done any research into infant congnitive development. When Jake was first born, thought he was about as smart as a fish. Not a wily oean fish who has to adapt to his environment and struggle to survive, but a fat, aging goldfish alone in a small fishbowl, just waiting for food to hit the surface of the water while he swims in his own dookie. Now that he's a few months old, I think he's as smart as a bulldog puppy, maybe about 2 weeks old, tripping over his own paws and yelping when his nose hits the dirt. I'm happy with the progression. By this time next year, maybe Jake will be as smart as a 3-year old hippo.

He is so cute. I'm glad that he's doing better...how scary to have him early!

Can I come and snuggle him just for a little while?