This just in: People are bad.

I've spent a lifetime being foolish.

I naively believed in the good of man; I truly believed that we are all born good, and while circumstances can cause some of us turn a little bad, for the most part we remain basically decent. It pains me to admit that I was wrong. People are born evil.

But what a flower-sniffing sap I was. Once, in a college writing course, my professor asked us to pick one of two viewpoints--that people are basically good or basically evil--and write a paper defending that viewpoint. Naturally, being the wide-eyed young idiot that I now realize I was, I ranted on about how of course people are basically good, and only through extreme influence do we sometimes, tragically, take a misguided turn for the bad. What an idealistic little Mary Poppins asshole I was.

Today, cold, hard truth smacked me in the face. I was sitting around minding my own business (probably musing about how the world is one big happy Brady Bunch episode) when I overheard a cherub-faced little boy of about 8 chattering away to his father about a cartoon he had seen on TV recently, featuring Wile E. Coyote and the Road Runner. The distracted father was trying to do some work on his laptop while the kid yammered on, excitedly describing one of the coyote's elaborate anvil-as-weapon attempts on the road runner's life. 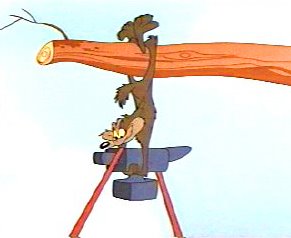 The father muttered the occasional, "Mmm-hmmm," or "wow," in a flat, monotone voice. The kid was too young to understand that his father wasn't listening to a word he was saying, so he took his time meandering to the end of the story, wherein, as you might imagine, the road runner escapes once again, leaving the frustrated coyote steaming. The kid was the picture of childlike innocence, so excited about this silly cartoon...until! He wrapped the whole thing up by wistfully commenting, "I hope someday the coyote catches the road runner." To which Father Clueless mumbled, "Yeah, that'd be great."

What? This adorable little serial killer in training wants the coyote to catch the road runner?! What kind of parents raise a little monster like this? That'd make for a fun cartoon, wouldn't it?

Scene Three: With grim resolve, coyote chases road runner again, this time with a fresh look of wild-eyed determination. At the end of a long, feverish chase, Coyote catches road runner, ripping into the bird's delicate throat with his teeth, amid the bird's tortured screams of agony. Blood-spattered coyote gleefully feasts on road runner's tattered carcass by the side of the highway, while cars whiz by, the occupants indifferent to the carnage.

Scene Four: Crazed from the taste of blood, the coyote goes on a maniacal killing spree, butchering and devouring every animal and man that crosses his path. Eventually, when he has decimated the entire population of the dessert, he begins to infiltrate other cartoons, slaughtering Mickey Mouse, Spongebob Squarepants, the Powerpuff Girls, the Afflac duck, the Geico gecko and the Energizer Bunny, as well as scores of others. The 8-year-old boy mentioned above sits in front of his TV cackling with demonic glee, rubbing his chubby hands together as he begins to map out his own plan to kills his parents, neighbors and classmates and boil them all together in one massive stew pot.

So there you have it; my rosy view of the world has been shattered. I now admit that yes, the world is a steaming cesspool filled with villains and cads, and when empty-headed hayseeds like myself stubbornly insist that people are innocent and kind, our foolish naivete only makes it easier for the scoundrels to pillage and plunder.

Well, no more. From this moment on, I will no longer bumble through life with a fairy tale notion of the goodness of mankind. I will approach every stranger with the belief that he is not a friend, but a bloodthirsty killer on a rampage, more likely to gut me like a fish than say hello. I will sleep with one eye open. From here on out, it's kill or be killed.

And I'm starting with that little 8-year-old, cartoon-loving murderer-on-training wheels. Next time he looks up, he's going to see an anvil blacking out the sky.
Posted by karla at 11:03 AM

I always wanted the coyote to catch that smirky little feathered PITA when I was little.... and I turned out just =twitch= fine...

Hurry up, for Christ's sake. That effing Coyote is lurking around my home for the aged, waiting for some fool to open the door.

That Road Runner needs to be stopped. The little bitch has to be going over twice the legal speed limit...and for what? Where on earth does a Road Runner need to be in such a big damn hurry??? Fuck him.

Yes, I think that's a much safer, saner, healthier outlook on life. Good for you!

Wile E. Coyote going on a killing spree would be like the best cartoon ever. And why are you worrying about 8 year olds when your infant son is hijacking Elmo's car? Grand theft auto at age 2, ethnic cleansing at age 12.

Did someone forget to take her anti hate meds again? Now, Karla, I know we have talked about this! You mustn't forget your meds dear girl. :)

OMG...you dont think Wile E. Coyote will go after Hoops & Yoyo next do you? DO YOU???

I've linked to this post from my funny links site. You can see (and vote for!) the link at http://www.eatmyhamster.com/item/People+are+bad

Hmm... I think we are all looking at this all wrong. The chubby little 8 year old and his unworthy father needs to be rushed to the "Happy-Good-People-Maker Farm" in some far far place that takes them and hog ties them to a chair set infront of the tv to watch reruns of Brady Bunch, Lavern and Shirly, GI Joe (where there is always a lesson on why it is best to be good instead of bad), Xmen, Spiderman, etc... until they puke rainbows.

Infact they will need to wait in line after all the bad people that I seem to keep running into have gone through the session first.

You probably think that Trix are for kids, too, don't you?

That boy must be stopped. Please, Karla...save us all!

See, and my rosy view was shattered upon learning that my four year old niece has taken to calling her father asshole.

PS: It would be interesting as an anthropology thesis to see which cartoons serial killers viewed during their formative years...

You know, I was ok with the demise of Spongebob, and the Powerpuff girls, their annoying, but when you lump in the Geico Gekko, I gotta take a stand! Everyone knows he's real, and therefore immune to cartoon annihilation. The afflack duck however, is fair game...I mean, if there's a possibility of doing away with (what the heck is his name? it was on the tip of my tongue) that voice, then I say, we gotta take that chance! Stacie

my child thought the same thing, so i did what any loving responsible parent would do: i bought a live bird at the local pet store and made him kill it with nothing but his bare hands and teeth, and the whole time he was crying i said, 'SEE! I BET YOU WISH THE ROADRUNNER WOULDN'T GET CAUGHT NOW!'

i knew the lesson hit home, what with all the nightmares. being a parent is both difficult and rewarding.

Karla, Karla, Karla...it's so precious that you still refer to your mandatory shock treatments at the women's prison as a "college writing course."

Now if that kid watches the old episodes of The Flintstones, he'll be wiser than any of us could ever imagine.

I have an 8year old two doors down from me I'd like you rough up for me. He threw rocks at my Sassy, and he needs some anvil treatment.

I kind of always wanted the coyote to catch the bird, too. Until I read your treatment (which is very good, by the way, albeit alarming in its graphic nature).

You've changed me, Karlababble. Changed me for the better.

Wow. Does that mean i'm a bad person too since i've been rooting for Wile E Coyote to catch Roadrunner finally? It was cool as a kid that he kept getting away, but by the time you hit puberty, you pretty much want that rocket from ACME to finally hit it's target so they could end the show. That "MEEP MEEP" noise he used to make got on my last nerve.

Just make sure the anvil says ACME on it.

You have to write a book Karla!

If I remember right, Warner Bros. did make one in the 80s where he caught him, but everyone that saw it HATED it. useless trivia here.

The desert = The world.
The road = Your life.
The Coyote = You.
The roadrunner = What you want out of life.
Shot out of a cannon, down a three hundred foot cliff into a pile of Cacti with the anvil you were holding landing on your head, looking up to see the cannon and the rest of the cliff you dislodged about to also impact, as you are holding up the little white surrender flag = What you really get out of life.

Yes, the Coyote did in fact catch the Road Runner. He had him by his scrawny little neck and was about to unleash carnage such as the world has yet to see (even in Biblical terms) when he gets a confused look on his face and then holds up one of those inane little signs he used to speak to the audience that read "now what to I do". So, no carnage for Karla.
Why didn't Wile E. just order some take out instead of a jet powered rocket ship from ACME?

Given how much ACW and Wombat rave over your blog, I'm surprised how few posts about fecal matter I'm reading. Which is to say, I haven't yet read a post about shit. WTF?