You are no longer allowed to vigorously play air drums along with songs on the radio. There will be no more dramatic thrashing, elbow flinging and hair-slinging. I see you're desperate to broadcast the fact that you're a musician, and therefore worthy of getting laid, and I sympathize with you, because you're right--other than your little once-a-month, hole-in-the-wall bar gig, there really IS nothing very interesting about you. But you're going to have to find a more creative, less desperate way to announce it. 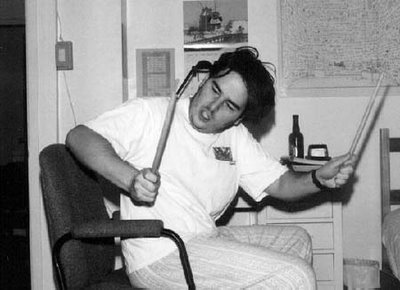 That means you're also going to have to stop shouting, "Yessss! Good TUNE!" at the start of every third or fourth song you hear on radio, followed by an energetic "look at me" display as you throw your head back and play air guitar with your eyes squeezed shut like you're in the initial moments of coronary failure. 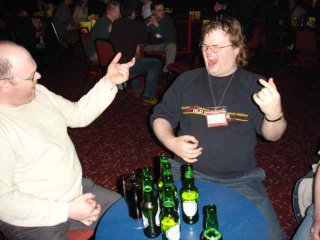 And don't tell me it can't be done, because I have friends who are musicians, and they manage to not look like total asshats every time a good song comes on. In fact, I'm convinced that's the best way to distinguish a genuine musician from a sad little wannabe--how well he's able to keep his composure when a song that he knows how to play comes on the radio.

All I'm saying is, let there be a moratorium on dipshittery. If I see another one of you numbnuts launch into a full-scale assault on an imaginary drum kit the next time a Rage Against the Machine song plays, I shall be forced to gut you with a makeshift drumstick.
Posted by karla at 1:00 PM

Obviously, you're not a fan of Funky Winkerbean or Jack Black I presume. BTW what's an asshat?

Edge: I love Jack Black. He gets away with it because he's Jack Black. As for an asshat, I think Praying Mantis summed it up when he said "dickwad."

While I agree with you about the air-drummers and the air-guitarists, I caution you not to lump the air-glockenspielists in with the asshats. Those guys work pretty hard to hone their craft.

Also, I will say that air-timpani players will always hold a special place in my heart. Anyone who ASPIRES to the lamest job in the orchestra is someone who needs a hug.

Asshat is my new favorite word to disparage people with.

Honestly? Anyone who plays any "air instrument" beyond their teenaged years deserves not to get laid. Playing air instruments announces to all present, "Yes, I am a dork. A VIRGIN dork."

I also have a stinking, not sinking, suspicion they also possess multi-textured skidmarks in their undershorts as well.

Timpani is the lamest? Sheesh, I'm going about this all wrong. I thought the triangle, panflute, and the piccolos were the lamest!

Don't be so hard on us self-proclaimed musicians--sometimes we don't get a choice in these things. For instance, ever since I lodged a kazoo in the wrong end, I been an involuntary member of the music industry.

You tell 'em, you crazy babbler!

Now if you'll excuse me, it's time for my music lesson. I'm trying to master the skin flute...

Good luck with that skin flute. You may find it difficult to play considering its small size. My suggestion would be to try to find a bigger instrument to play.

Fine. Maybe I can take up needlepoint...

Bash all you want. But no one gets more "air head" from airheads.

On the other hand, (for once) you DO have somewhat of a point. I think it's pathetic to glance over and see a fan with an imaginary microphone aping me as I belt out Karaoke jams.

You know, things could be worse. A person could end up singing like this:

My skin flute is HUGE. The last time you saw it, it had just been in the pool. You must allow for shrinkage, crazy babbler!

Maven, here's why the Timpani player is the lamest dude in the orchestra:

This dude probably has spent a lot of effort learning to be a percussionist. He may have studied at one of the finest conservatories in the country. He's probably put a lot of time and work into getting to be the Timpani player in a major orchestra.

And there he sits, as the symphony begins, doing absolutely nothing. 10 minutes in, he's still doing nothing, because nobody uses the timpany right out of the gate. 15 minutes into the symphony, Mr. Timpani is still sitting there twiddling his thumbs, but he's starting to get excited because, as the music begins to build, he's getting to the part where he can put all that training to use. 25 minutes in, and his moment is almost here! The music is getting louder, more frenzied! The orchestra is surging toward that big climax! Our man stands! He grips his mallets! Almost there... Almost there... Now! his moment is now!!!

Aaaaaaand he's done. Plus, he still has another five minutes to wait while the rest of the musicians wind the piece down. I guarantee you the triangle guy at least got to play a little.

Lamest. Job. In the Orchestra.

And yes, I've put WAY too much thought into this.

Personally I've outgrown "asshat" and have moved on to "twattwaffle".

Why would anyone launch a full-scale assault on an imaginary drum kit to Rage Against the Machine in the first place?

Yes, asshat is a truly noble word, and one that I plan to use much more often now that I am teaching at a university.
By the way, what is a makeshift drumstick? Isn't a drumstick just a drumstick? When does it become makeshift? Or is that the one you used on Wombat when he...um, well, never mind.

Today, December 8, is the 26th anniversary of the death of my former neighbor, John Lennon. We miss you, John.

How about the person who fondles or makes out with the groupie of the air musician while they are in the throws of their seizure? Are they asshats, or opportunists? I guess thew could be bottom feeders. Really, if an air musician has a groupie. . . . they are definately the mud dwelling pond fish. Just my take on it.

Ahhh, do we all feel better?

Now let's move on and ignore wanna be everythings.

These particular wanna be's try so hard that it looks forced and then they just look pathetic.

Who cares if someone is jacked up dorkways? Roll your eyes and try to ignore... or take a picture with you camera phone and post it on your blog like I did.

What? You haven't been to my blog yet? Well why?

That's not an answer.

...Well I never said I was a great blogger.

Do you have to be great to blog?

What if you're better at commenting?

Dang, I was all jazzed, listening to some tunes and now I feel kinda.. I dunno... inadequate. heh.

Oh damn! I just read on and it looks like I'm worse that an asshat air guitarist because:

1) It's not between the hours of 1 AM and 1:15 AM on Mondays, 3 PM to 3:01 PM on Tuesdays, or just before twilight on Wednesday through Saturday.
2) I didn't use the words juggernaut, bootylicous, ramification or stupen. But does it count if I promise to add them to my vernacular? I'm sure I could squeeze them in somewhere throughout the day.
3) I unaware of the 6-inch heel requirement and haven't access to a baby's bonnet.

So I guess I'm screwed. My stupen luck.

Well, my husband has NEVER been so insulted!

Grreat rant on those truly needing to be ranted on! You didn't forget the air-organists did you?

Did you ever see that Scrubs episode where a few of them start an "air band?" It is pretty funny. I saw it on reruns just recently. They had a drummer, bassist, lead guitar player, and singer. They even had try-outs for the band and practices and everything! It was a bit much.

I am a personal disliker of the "white mans overbite" whilst dancing.

I dated a timpanist.

You're absolutely on target with the description, Mr. Wombat - right ON.