My friend Kristina (pictured on the left) is a great catch. If you're a single guy (or hell, maybe even a girl), you would definitely try to hit on her. If you're not single, you would probably try to hook her up with one of your best friends. She's adorable, she's tiny (size 3, for Christ's sake, something which I previously thought existed only in movies and fictional novels), she's fun, and she's incredibly loyal. Why do I tell you this? Because I need your help. 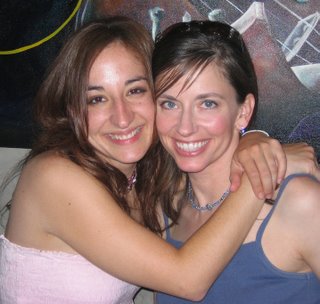 There are many guys who are interested in this totally hot friend of mine, but Kristina has apparently been drugged or hypnotized by her ex-boyfriend, because she cannot seem to let go of him in spite of his noticeable lack of appealing character traits. Although they're broken up, he manages to show up on the scene only every once in a great while, and only when he gets a whiff of the fact that she may be showing some interest in a new guy. He sticks around just long enough to get her to forget about the new guy, and then poof, he's gone again like Houdini.

Clearly, she needs an intervention, but this is a tricky business because she doesn't see anything particularly distressing about this ongoing scenario. So it's up to me to get him out of the picture, but how? Below are some possible solutions I've come up with so far, for your review.

1. The most obvious answer is to kill him. I watch enough true-crime TV to know that it can be done; all I'

d need is a crawlspace in my house. This would be the surest way to free Kristina up for the opportunity to find happiness with a decent guy. A great plan! One small downside: A lengthy jail sentence. I am too prissy to flourish in the far-from-plush accommodations I've heard can be found in most prisons. These places probably don't even offer TiVo, much less a decent pedicure. I love Kristina, but maybe not quite enough to sleep on a bacteria-laden cot and miss the entire season of 24 for the next several decades.

2. What if I could cause Kristina to develop amnesia? On the surface this sounds like a total win. She would forget all about what's-his-name, and her life could go on as if he never existed. Apparently

it's not hard to get amnesia--I've seen cartoons in which a person merely falls down and gets a bump his head, and bam! He forgets his own name. I could just give her a good shove, and that would probably solve everything. On the other hand, though, she might also forget me, and upon meeting me again, might not like me very much. I don't want to take that chance. For reasons that mystify me, and probably you as well, she loves me now, and I don't want to risk losing that. It's probably not all that easy to make new friends when you have an incredibly disagreeable personality.

3. I could cause him to develop amnesia. He'd forget about Kristina! He'd 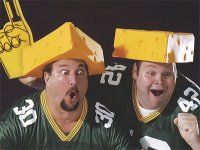 stop showing up in town; no more late-night drunken phone calls! A big upside is that I'd thoroughly enjoy giving him an excessively hard shove. Then, just to be safe, I'd put the confused chap on a bus to Wisconsin, where hopefully he'd stay, since he wouldn't be able to remember where his hometown was. True, people in Wisconsin would be very angry with me, but screw them. I have no pity for people who go to football games--or anywhere--wearing hats shaped like wedges of cheese.

4. I could introduce Kristina to such a fabulous, irresistible guy that she would totally lose interest in her ex. This is where you come in. I think I made it pretty clear in the past that I don't have the kind of male friends I'd trust my girlfriends with. But you! You're not like me! You've probably led a sane life, filled with normal, mentally healthy friends and acquaintances who have good jobs, no criminal records, and no periodic, state-mandated drug tests. So I'm calling on you for help. Gather up those fine, upstanding young men for my review and approval, and once I deem them suitable for my dear friend Kristina, I will set them upon her like a pack of dogs, and may the best man win her love and affection. I'm sure her ex has his good points, but we're talking about one of my very best friends here--Kristina is someone I love very much, and she deserves someone who loves her at least as much as I do, someone who would treat her with the care and respect she deserves.

In the event that you don't know any single, lovable, disease-free young men, I will also be accepting better suggestions than the ones I came up with above. Know how to eliminate an undesirable guy without landing on death row or being doomed to a life on the run? That's the kind of information I can use. See, Kristina's birthday was Thursday, and although we went out and celebrated with food, booze and gifts, it would be a really great birthday gift if I could solve this little problem for her. So please help. You've spent enough time merely reading my pearls of wisdom and words of poetic beauty on this site; now it's your turn to give something back.

Listen, I happen to know that Follow that Star is in the market. Go bug him.

Me, I am too old to go around beating up on girls.

Jeremy Over There said...

What the hell is going on on the wall behind you? I don't know if that's ice, blood, or glass.

The way you describe their relationship, It makes me think of Tyler Durden and Marla Singer

I'm single, and I would totally do her! Two questions:

1. How strict are you about the whole "no criminal record" thing?

2. Would your friend be willing to consider a nose job? Not that she absolutely has to have one. I'd do her anyway, but I thought I'd ask.

Kristina doesn't need a nose job, but I'm glad to hear you're not opposed to surgery! Now you can get that penile implant you've needed all these years. Do that, and I'll consider waiving the "no criminal record" stipulation.

Alas, in our town the joke goes: What do you call a guy in (this town) without a girlfriend? Homeless. But someone else may have more motivated men. Good luck to her.

i think wisconsin owes you that much.

Number 1 is the obvious choice. You don't have to do it yourself. You hire it out. Actually, you hire someone to hire it out. You want at least two, and preferably three layers between you and the hitter. It's all about plausable deniability.

I'll call you. We'll talk. I have many associates.

This is not a problem.

Some of us are not so superficial that we can decide whether we want to be with someone from a single photo. Do you have a rear view picture?

If you could pass his number this way, after I get off of the phone with him....he'll never come around again. No, really.

5. Fly her to Germany for the World Cup Finals and a few mighty fine pints with those young European lads... make that hooligans.

In any event, that should get her mind off things to say the least.

Why is that pretty girls get hooked up with beer-belly jerks?

Put her on a bus to Houston. I might be a little late picking her up, but the depot is really charming after dark.

I'm totally available. No criminal record, and no mandatory drug tests. I'm also a veteran, so I should get preference. Only problem is that she'd have to move halfway accross the world to a crappy country where the average temperature in the summer is 130. If she's willing, then i'm definitely there. :)

#3 is your best option. Not only do you get rid of him but you get the fun of pushing or whacking him over the head (repeatedly if necessary). Then, if still required, you could move onto option #4 of your plan.

But never understimate the value (or fun) of thumping someone in the back of the head.

You know soliciting for single guys on the internet for your friend, may just bring out even stranger guys from the woodwork :)

so very amusing. as always. in fact, been catching up. everything on the page is flippin' brilliant.

I'm way out of her league but she can have my brother.

Ok, here is a win win for both of you and little jakebabble as well. Tie up and gag little Jake and place him in the trunk of the bad boyfriends car. Make sure that there are plenty of incriminating things in there as well (condoms, big garbage bags, a book on human evisceration and torture, a shovel and pick axe, etc etc) Then give it a few hours until Jake is really unhappy and tear streaked and call the cops. Ex-boyfriend goes to jail (with any luck he gets a new "girlfriend"), Kristina gets over the gay pedophile kidnapper(momentary aside - kid napper. . .jake is a kid. . .what the heck is a napper. . . hahahaha) murdererous boyfriend, you get the satisfaction of a job well done and an excuse for physically assaulting the ex-boyfriend, and best of all Jake gets a get out of jail free card because of the "trauma". Of course you'll have to get him some counseling to make it seems like he was scarred for life, but I'm sure you know a shady Shrink or two. What do you think? Win win?

I was ready to fill out an application to date your friend up until the words "disease-free". Why you gotta be so picky? :-(

I have a great friend in mind for her. Very nice looking man, possible willing to relocate. He has no abnormal attachments to his mother and adequate oral hygeine, however, she would have to be willing to look past the tripletesticularsyndrome.
Let me know. I'm on it.

Ehhhh, go with number one, but be sure to dispose of the body someplace realllllly out of the way.

No body, no crime, right? He could just be "missing."

She's hot. If I kill her boyfriend, can I have lots of consentual sex with her?

Can I assume that your silence equals consent?

Lovable AND disease-free? Who is this lady, Cinderella?

Happy Birthday Kristina from an old friend in ATL.

Hi Aaron! Thanks for the message. I will be there in a month so we need to hang out. Go to myspace (I hate to admit I have that) and send a message to me. I'll give you my email address. -Kristina