I came, I saw, I called the mannequins "whores."

Against all odds, we made it back from Cabo. So I have this to say to all you critics: I told you so. Contrary to what you thought, I was indeed able to make it across the Mexican border and back without having to submit to even one cavity search. I even offered, several times, and the airport security guys just stared at me like I was crazy. Later, when I offered again, the maid at our hotel gave me a similar look. Still later, when I offered for the last time, the stewardess on our return flight snatched both drinks out of my hand and stalked away. People are strange.

To answer your questions (that's right, I hear you), no, I didn't end up puking in the sand. I behaved myself like a lady. A low-class, white trash lady with a variety of psychological problems and a criminal record, but a lady nonetheless. And no, our resort was not devastated by a tropical storm during our stay--in fact, not one drop of rain fell. The ironically-named Accuweather forecast's long-held record of 100% inaccuracy still stands.

But vacations are not all about frolicking in the sand and sun. Sometimes you learn a few things amidst all the relaxing, boozing and mocking the locals. Here's some of what I learned on vacation:

1) The DFW aiport distinguishes itself by having the most heinous, frightening "sculpture" in the history of bad airport art. 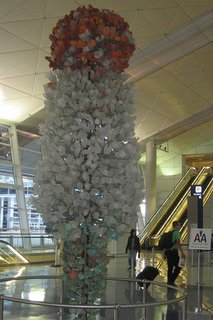 If you're thinking, "Okay, you're exaggerating. That's not great, but it's not terrible either," then you're definitely not getting the full impact. Have a closer look. Go on. 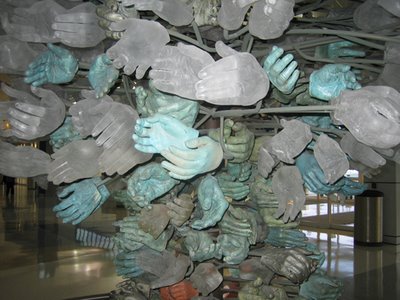 Yep, those are the severed hands of cadavers. That's not okay, even in Dallas.

2) It's apprarently not considered high comedy to shout at a couple walking past, "How much for your sister?" At least, not while still in the U.S.

3) Probably lots of people pee in the ocean. But, as I learned the hard way, standing in ankle-deep water and squatting to do so isn't typically how it's done.

4) "All-Inclusive" is apparently tropical resort lingo for "weak drinks." The trick, we discovered, is to upgrade the liquor, as in "I'll take a pina colada with Bacardi" instead of just "I'll take a pina colada." For some reason this guilts the bartender into adding more than the usual single drop of liquor. Or maybe it's the pistol we were openly waving at him as we ordered it.

5) Mannequins in Mexico are different from mannequins in the US. The ones I regularly see in Texas stores are rather androgynous and flat-chested, like the one shown below: 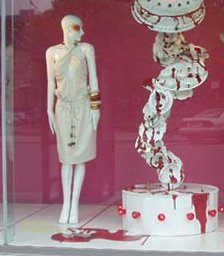 But the ones I saw in Mexico made me think dirty thoughts. 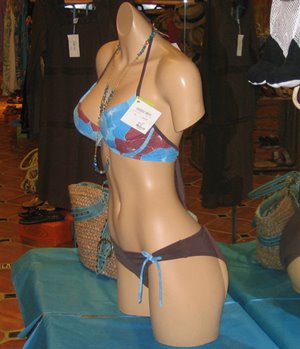 The busty mannequins in Mexico put me to shame--and made me realize I need a boob job. It's just seems wrong when I see men's heads turning my way, only to discover they're craning to leer at the mannequin behind me.

In spite of the weak drinks and the hooker mannequins, we had a great time in Cabo San Lucas...but it's great to be home. We all know kids grow and change way too fast, but I was unprepared for how different Jake would already seem after just 6 days away from him. When we dropped him off with his grandma before we left town, he was our cheerful little 20-month-old, clutching his Elmo book and drinking out of his sippy cup. When we returned, he had already moved into his own apartment, defaulted on his rent, been charged for domestic abuse following an argument with his live-in girlfriend, and done time for two misdemeanor crimes. Kids. They really do grow up way too quickly.
Posted by karla at 9:00 AM

The Mexican mannequins must have been leftovers from Victoria's Secret. And if you think taking Jake back home after his misadventures was hard now...wait until he's still doing it at 30!

Which, come to think of it, is how I like my hookers. Mmmmmmmmmmm...

WTF is that hand sculpture? Who approves of something like that? It look slike something in your nightmares. Maybe it is to scare you to getting on your plane quickly and early? Freaky...

I'm with Wombat, you need to splurge once in awhile on a better class of hooker. Trust me, the extra appendages are worth every dime.

If it makes you feel any better, the mannuequin in the picture has some sort of ass deformity. Actually, it looks like some kind of shoddy mannequin butt implant--a Lee Press-On Ass, as it were.

Welcome home, you crazy babbler! I've been holding down the fort here just like you asked me to.

The hand sculpture is truly awesome. Reminds me a little of the tower of torsos in Cancun and the famous pyramid of severed penises in my basement.

(P.S. - While I was typing this, Jake just broke his hip while escaping from his nursing home.)

Eek, that "sculpture" belongs in D.C. in the Hirshhorn Museum. I have to agree with tfg the mannequin is deformed, although I do envy the abs.
~G

The hand scupture: HORRORS! Now I know I WILL remember the nightmares I will have tonight. {shudder}

i have one of those "mexican mannequins".

what that sculpture needs is more headless mannequin whores. no doubt. in fact, i'm sure Dallas got all the hands from leftover mexican mannequin parts. I hear st. louis is putting in a sculpture with nothing but legs and heads.

Having spent some time in Texas, my guess is that the sculpture was intended to be displayed at the border as a warning to illegal immigrants.

The mannequin photos made my keyboard sticky.

What's the red at the top of the hand sculpture?

Well, you KNOW where the severed hands came from--ask the mannequin. I think she's a doll!

So glad to hear you are home.

I'll be in Dallas Nov 1 - 4. Any chance I can buy you and Brian a drink? You still drink right? It's not just peyote and ecstasy protein shakes?

Welcome home! I think Crunchy's onto something with the hand sculpture/INS theory. Good thing you came home in time to help Jake with his rent.

That sculpture was supposed to be shipped to the middle east. . . . a gruesome reminder not to steal. . . . unless you are the dictator. Maybe it is an ode to our welfare programs and is illustrative of the many handouts we routinely give to the illegal immigrants to keep cheap labor over here.

That was a latino targeted manequin. They naturally have more junk in the trunk and bigger boobs. It's just a societal difference. Mexico is not as sensitive to the emotional ramifications of inappropriate marketing like we are here in the states. Our manequins are all french.

i was going to leave a comment, but after reading everyone elses, i got nottin'...

That sculpture: are they KIDDING?

is it just me, (I probably shouldn't be looking this closely) but does that mannequin have a cupboard door in it's arse? I mean what a drinks cabinet that would make?!

You know, people just don't appreciate offers to sleep with your sister in Mexico like they do in the states.

That mannequin pictured sure got my attention! Was that the Venus de Mexico?

Hopefully all-inclusive didn't include the Tijuana Trots as well. As for the mannequins and boob jobs, cones make the world go 'round.

That sculpture on the other hand would work well for our neighbourhood Haunted House this year.

Welcome home, Karla - glad you're back.

Wow, I'm impressed with Jake's rap sheet. I thought I saw him on America's Most Wanted!

By the way, Wombat is probably looking at the horrid DFW "sculpture" and thinking, "The ultimate hand job!"

Neil: The mannequin has me beat in the tan department too. Despite 1.5 months of tanning in prep for the trip, I'm still about as tan as a jug of milk. Check out the flickr pics. (I know, there's no link here, but Neil knows how to find them.) It'll make you clutch at your chest and shriek "Christ! Get some sun!"

that mannequin is hot! surprised no one in your travel party started humping it.

Pug's Travel Tip 004 - Hire Karla as your "drug mule", since her cavities are of no interest to anyone beyond her blog circle.

Pug's Marketing Tip 001 - Sell DFW "Severed Hands" sculpture to Muslim country for THEIR airport. Local travellers will be able to fondly reminisce about the days when THEY still had both hands.

Pug's Travel Tip 005 - Avoid wading too close to Karla, unless you happen to be "into" that sort of thing.

Pug's Travel Tip 006 - Bypass Tijuana hookers in favor of Mexico's indigenous mannequin population. They are easy to clean with a wet-nap, and the head is already severed, which saves valuable "foreplay" time.

It's good to have you back. The Puritans were running amok in your absence. Plus we were on pins and needles that they wouldn't allow you back in, what with all the anonymous calls to homeland security and all.

Sorry to be exceptionally weird today, even by my low standards.

But I read further in Spaceman Spiff's excellent comment, the following paragraph:

"That was a latino targeted manequin. They naturally have more junk in the trunk and bigger boobs. It's just a societal difference. Mexico is not as sensitive to the emotional ramifications of inappropriate marketing like we are here in the states. Our manequins are all french."

This fired the few precious neurons in my skull, producing no less than THREE thoughts at once.

1) I thought Latino women had large booties and SMALL breasts. As an International Rennaissance Man, I am a fraud.

3) I suddenly have the overpowering urge to French kiss a mannequin.

Whoa...that Mexican mannequin is the absolute opposite of heroin chic, no?

Oh, and yeah, that hand sculpture thingie is quite nasty indeed.

From a distance it looks like a Christmas tree, though - maybe Stephen King would be interested in buying it?

pu
gotta clear this up. depends on which latino for the butt/boob connection. that junk is all over the place. i, being half mexican latino flavoured, have huge breasts and no ass whatsoever. in an effort to buy clothes somewhere besides Chicos, i had a reduction. now i'm shaped like a keg.

that mannequin has it going on on all continents!

karla - i have missed your lunacy. thanks for the smiles :)

This is completely off-topic, but there's a book you need to read to your rug-rat.

I want a body like the mannequins from Mexico. But I must agree with another comment, it does have an ass deformity. I will definatly keep my ass.

We ALL Know you went over to that hand sculpture for a free feel, Karla. You mannequin whore. I am slightly insulted I wasn't invited to Cabo, but after the 'incident' involving me and a foreign priest, I am not allowed to travel internationally. Or locally, for that matter.
We HAVE to get together in a platonic, non lesbo way.

This is not the worst airport sculpture. Atlanta in the "T" terminal resideth the honorable gilded crap exhibit. It literally looks like someone followed their dog around all year and saved the best specimens. Right size (OK for a bid dog), right look, just frightening. I was afraid to breath around the exhibit.

OMG...have to delurk to comment on the hand sculpture. From a distance it looks not like a Christmas tree, but like another thing made of "wood" with a pale bottom and engorged flushed head. My sister and I were giggling until we got close enough to see it was hands - then were were completely grossed out.