I know you guys want to see pictures of Jake's 1st birthday party that took place on Sunday--not so much because you love kids, or because we're all one big happy family here in Blogland, sharing in each others' joys, sorrows and milestones--but because you're constantly baffled that he hasn't been taken away from me yet by the state, and the photographic proof of that always comes as a surprise. So as a little "F you" to all of you who've previously called Child Protective Services on me, here are a few photos to prove he's still with me.

First, let me say he got everything under the sun. Everything. Go ahead, name something; he got it. A boat? Yes. A plane? Yes. A Shetland pony? Yes. An impressive collection of hunting knives and 3 Samurai swords? Yes. Oh, and more clothes than Cher has in her closet. I'll never have to buy another outfit for him again, provided I can come up with a way to prevent him from ever weighing more than 30 lbs.

At any rate, he stepped up to the plate and performed his sole required birthday task well, which is the traditional Smearing of Cake on The Face. I had my doubts as to whether he'd do his duty in this regard, since he's not one to enthusiastically dive into new foods. Usually, when presented with a food he hasn't seen before, he will turn his head so far to the side that it threatens to swivel on his chubby neck, and he will remain in that prissy little pose til the food is removed from his sight. Only after I've rudely smeared a little of the offending food on his lips, and he eventually licks said lips and discovers goodness thereon, will he then open his beak for a bite. However, when the cake was put in front on him, he did not turn away, although he did not eat it, either. He first began grabbing handfulls of it and methodically tossing them onto the floor for me to clean up at my leisure. He had no intention of putting his frosting-encrusted fingers to his mouth, so once he finished getting a good solid coating of frosting on my carpet, I took a fingerful of icing and put it to his lips. His head swivelled like he was auditioning for a remake of The Exorcist, and I chased his fleeing lips until I was able to swipe them with the icing. He cried out in protest, made the kind of face I'd imagine one makes upon taking a bite of rotting human flesh, and then sat there unhappily til it slowly dawned on him that what he'd just tasted was actually pretty decent. Then he began smacking his lips, and quickly opened his mouth for another fingerful. Then he proceeded to take charge of smearing his face and hands with cake while the crowd cackled and grinned and snapped his photo. Mission accomplished.

It was all fun and games til our friend Jay suggested we light the "#1" candle on his cake. Jake was mesmerized by the flame, eventually giving in to his desire to see what it felt like. Apparently it hurt. You know how every time I post photos of Jake here on the site, several of you leave comments asking "Is he ALWAYS smiling?" And it's true, he does break out the big flashy grin for the camera just about every time. But just so you know that Jake does indeed have a full range of emotions, here's proof that, at least upon sticking his finger in the flame of a birthday candle, he does occasionally stop smiling. 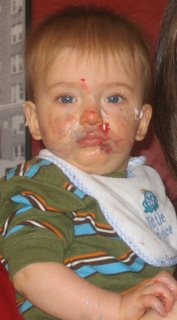 But he cheered up soon enough, and the event went on as planned. Later, when the crowd had dissipated, I inquired as to how he'd like to spend the remainder of his birthday. He enthusiastically replied that there was some housecleaning he'd been meaning to get to, which I thought was odd--I don't know if many children volunteer to clean house on their birthdays, but what can I say, he's a neat freak.

First order of business was the refrigerator. He went through it and carefully read the expiration dates of the various items, tossing the ones that were no longer fresh. Then he rearranged things so that the beer was on the bottom shelf where he could reach it, and the boring stuff like Splenda and steak sauce were on the top shelves where they wouldn't be in his way. 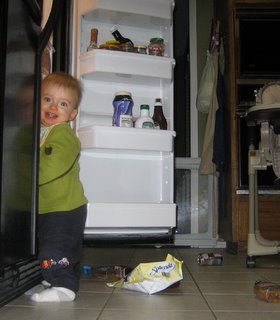 Next he hit the office, where he looked disgustedly at the bookshelf. "Most of these books suck," he declared, "and once again, the boring stuff is on the bottom and the good stuff is on the top shelves I can't reach." In fact, that's exactly what he was blathering on about when I snapped this first picture. Note the mouth, open in mid-blather. 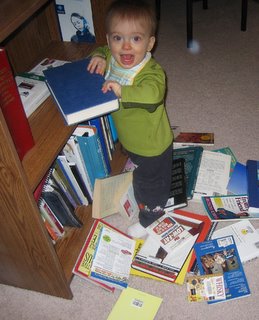 He started to cheer up as the project progressed, though. He takes great satisfaction in putting things in order, so by the time I took this picture he was downright festive. 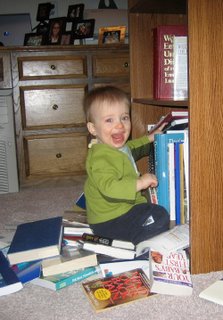 After that, he mopped the kitchen floors and scrubbed the tub in the master bathroom, muttering under his breath about how "some children have mommies who do this stuff" (whatever that means). Then he headed up to the attic to label all the boxes of Christmas decorations so they'll be easier to find come December. By then it was nearly one in the morning, and I had watched all the movies we had on DVD and was starting to get bored. I asked Jake to make a run to the liquor store for me, but he reminded me that it had closed hours ago, which only proves my point that everything would be perfect if we just moved to Vegas. So instead I had him give me a foot massage and a manicure, and then I changed his diaper and we went to bed.

You are too funny. Your Jake reminds me some of my grandson, but you do tell a tale. I know that you eschew exaggeration and embelishment, but even without those distortions of truth, your words carry the ring of truth.

Excellent! Can I hire him to organize my house? We planned on having the dog do it, but her heart's just not in it.

What an outstanding child. He'll probably grow up to be President, or maybe even the head fry cook at the local McDonalds. All of this just goes to prove what I've been thinking since I started reading your blog...there is NO way he's yours. You stole him, didn't you?

Give him loves and smooches from his Auntie Boom. AND SEND ME PICTURES!!!

Thanks for sharing Jake's special day with us! The pictures are awesome and your comments kept me chuckling! Happy Birthday Jake!

he puts all the books in an order, he makes up a colorful border, he comes when called...

Happy Birthday, Jake! I love the way he reorganized the refrigerator and the books. I think it's only a matter of time before Hannah follows suit, but for now she's too busy clearing off the coffee table.

Wow! Jake and I have the exact same cleaning method!

Also the same tendency to shit our pants.

On an unrelated note, my "word verification" word is "EYIOW," (I shit you not) which is the exact noise I make whenever I accidentaly read your blog.

The best way I know to keep him under 30 pounds is to give him a pack of smokes and a lighter and let him go to town and get addicted to growth-stunting cancer causing death sticks. Little kids LOVE menthol, too!

Awww happy happy birthday Jake! Did I ever tell you everytime I look at the name of your blog I think of "Kaballah". Well, I do.

Happy birthday, Jake! You are so good to your mom.

Where in the world did you find a second edition My War with Herpes? That's a tough book to find, I hear.

Such a beautiful boy and a house cleaner as well! Care to trade for 2 lovely (read messy) girls?

I can't wait until Jake ends up like Jack Nicholson's OCD character in As Good As It Gets.

Can we arrange for Jake to marry my daugher? I mean, I know that type thing is unfashionable now and all, but fuck it. With my child-rearing skills, she's going to need all the help she can get, and Jake's going to make an extraordinary husband one day. Or housekeeper. Either's good.

At first, I wanted to adopt Jake because:

A) He's so darn cute, and
B) I was sure he was being neglected in your home

Now, I just want the kid to come organize my closets.

I know he'll grow up to be a great husband someday. Have you ever thought of hiring him out? What about having him teach classes?

Let me know when he's available and my hubby would looove to sign up. Happy Birthday, Jake!!!

This is why I keep coming back here, your story telling is hillarious. OH, and Jake is the cutest thing!

WHOA! Glad that wasn't my house!

Cher's never weighed more than 30 pounds. You've got to find out her secret.

He is so cute. Fun times. I hope my child is neat and tidy, it would really help me out.

My Nana says coffee is the way to go to stunt growth. Couple with some meth and you'll have a REAL cleaner on your hands...

Am I supposed to refirgerate my Splenda?

I always thought the "sole birthday task" of any self-respecting newly-minted one year old was to scream at the top of their lungs, staging a complete and total meltdown just before the cake part.

But maybe that's just my experience.

Just found you through Jonathan at "Touche, life. Touche." Love your blog - and Jake! Quite the house cleaner, that one.

I thought immediately of you?

Yo - happy belated to Jake! I see he induldged in the traditions - messy cake face, destroying the house, etc. But did he paint with poop??

Oh God, this was so funny that I actually cried before I laughed!