Thank God no one watered down my tequila

Finding the time to sit down and write a blog post is tricky. My free time has gotten steadily more scarce, and thus steadily more valuable to me, over the years. This is a far cry from my life in high school and college, when I had a bottomless supply of free time, which I put to good use, as shown here in Exhibit A: 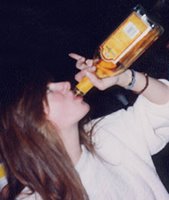 It takes time to get through a bottle of tequila that size. And for what? The dubious payoff that eventually you might end up with this look on your face: 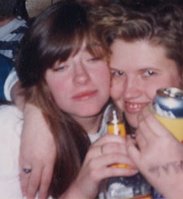 Achieving that look takes time. I rarely find myself with that kind of time these days.

However! Recently Jake has begun a Mother's Day Out program two days a week. If you're unfamiliar with the concept, it's like a little preschool class where Jake can go to play, learn new things, and interact with other kids--and more importantly, his mommy gets to stop playing, teaching new things, and interacting with kids. They really should call it "Mother's Day Away from Baby," or "Mother Can Pee in Private For A Change."

I am relieved to discover Jake loves it. And why wouldn't he? They serve Tang there! Tang contains a proportion of sugar Jake never dreamed could exist in such a small amount of liquid. At home, he drinks what I deceitfully refer to as "juice," but which is really a sippy cup filled with about 95% water and about 5% juice. As he dances eagerly around the kitchen crowing, "Jis! Jis!!!" as I prepare it for him, I do feel a slight twinge of guilt at the fraud I'm perpetrating. But lying to children is approximately 75% of what parenting is about, so when that pang of guilt tries to creep in, I just shake my head like I'm erasing an Etch-A-Sketch, and agree, "Yes! Juice! You lucky boy!" I thought when he discovered Tang at school, he would glare accusingly at me the next time I tried to unload this crappy watered-down juice cocktail on him, but so far he hasn't put two and two together yet. He must think they have a strict monopoly on Tang at his school, and that his loving mother has been begging all along for them to lift their restrictions and allow us to take some home, to no avail.

At any rate, suddenly I find myself with some extra time. A few hours a day twice a week! To the mother of a toddler, this is an eternity of time. What does this mean to you? Well, it means I can post more often. When I started this blog, I was posting every 2-3 days, and now it's more like once a week. Instead of the Tang you deserve, I've been serving you the blog equivalent of a crappy watered-down juice cocktail.

But there'll still be time left over! Now there's the question of what I will do with this vast expanse of time that I formerly spent reading, on demand, the same "Grover Learns To Read" book 7,000 times in a row, or agreeing enthusiastically, "Yeah, doggie!" 25,000 times in a row as Jake pointed to our dog and cried out, "Daaa!"

1) I could read some self-help books, with an eye toward becoming a better person.

2) I could learn to cook, with an eye toward becoming a better wife.

3) I could get involved with the community, with an eye toward making my town a better place.

4) I could watch more TV, read more blogs, sharpen my napping skills, and make the occasional phone call without having to shout over the tinny sound of "Old MacDonald Had A Farm" that emits from no less than 30 toys scattered throughout my house.

But I'm willing to take suggestions from you, if you have a better idea of how I should spend my new free time. In the meantime, I'll be running through the house in my undies shouting, "I'M FREE!"

OMG!! Jake is getting 'tang in school already? Damn, the kids are starting young these days! I didn't learn how to "jis" until I was 13...and I didn't get my first taste of 'tang til my prom night!

Dyck:
Are you SURE that wasn't "jis" you were tasting on prom night? You might be remembering wrong.

I'm all for the running around the house in your undies thing... As long as you post pictures...

I have a two and a half year old boy. Twice a week for four hours each, he goes to day care. I get one of those two days for myself. I spend the first hour giggling, being so excited to have time alone. I always seem to go for the most self indulgent things I can find to do. If I only get three hours(after giggling) I am spending it on me. To hell with the rest world.
It's like recess for parents. Enjoy it!

how are they rationalizing the nutritional benefits of tang in a school?

i know you live in texas, but is his school in a trailer?

I'm still "drinkin' the koolaid" that is your blog. At least I think it's koolaid.

My idea? Keep it free, but lose the undies.

BTW, I like the Etch-A-Sketch" concept. Does it work with all women? If so, THIS could come in handy.

I've heard of that Mother's Day Out program, but I didn't know Jake started it. He's awful bright, you know, sort of like...ME!

Are you sure you didn't fake the whole pregancy thing just so I wouldn't leave you for another man, shortly following my mysterious and amnesial reappearance 2,000 miles away after my apparent death at the hands of a jealous sister? Because I think we might have gotten some of the steps wrong.

Jake, EVERYONE knows that Tang doesn't exist in one's own home. It's the drink of astronauts and preschools, and otherwise it's a tightly controlled substance no one, not even the President of the United States can obtain.
Karla, congrats on the FREE TIME. I didn't realize these things existed, and just got a babysitter, but now I have to pathetically hide from my own child in my own house, and underwear-dancing is strictly prohibited, unless I let EVERYONE do it with me, which is totall beside the point.

I'm still trying to figure out what to do with myself during that time. Sure, there's lots of things that NEED to be done, but nothing that I WANT to do.

Steve Martin's IRS Agent: "Tang. isn't this the drink the astronauts took to the moon?"

Coneheads: "Astronauts to the moon! Hahahahaha!"

But on the free time issue, what about getting into collectible spoons?

Well, you can always read my blog more ;)

"I'M FREE", that remind's me of Danny DeVito in Tin Men. As for Tang, that makes sense for Texans:

He'll probably end up an astronaut taking the first bottle of tequila into space... Momma's genes.

In the meantime, I'll be running through the house in my undies shouting, "I'M FREE!"

I'm assuming that this is a temporary promotional stunt and you'll be raising your rates to the usual level shortly.

Damn it you two are fast. I was gonna go for that shit but you beat me to it. Dammit. Oh well.

I suggest coke. I hear it keeps weight off AND ruins your entire nasal business. I hear. What better do with extra time than to start a nasty drug habit?!

I have engaged in the "I'm FREE!" behavior on more than one occasion when I find myself completely and utterly alone in the house.

I've even been known to wander out onto the deck and giggle like mad while standing naked in my own backyard.

Just don't run with the scissors.

"But lying to children is approximately 75% of what parenting is about!"

Love it! How true! Same goes for teaching. If you say it with enough authority, kids will believe anything you tell them!

Heeeey, I want to get rid of my kid twice a week! Maybe she and Jake could hang out and share some Tang.

In all seriousness, please oh please tell me which MDO you guys use. I'm losing it.

You should probably spend those hours dreaming up new lies to perpetrate on your child. At least, that's what I'd do.

Tang truly is the greatest creation ever. One day Jake will thank you for your parental generousity. =)

I think I have that very bottle under my bed... wanna shot?

man if I'm not lying to my kids I'm not talking.

Happy emancipation! It took me two years to get up the nerve to put number 1 son in mother's day out. maybe six months with number 2.

I signed up number 3 son about five minutes after the seeing the pink lines on the stick.

I was actually contemplating homeschooling at one point. I still like the idea, but in someone else's home.

I wish that look was all I got after an evening with a bottle of tequila.

Was there any puking involved later in your evening? Oddly enough, and this keeps in line with today's theme, I think my downfall was mixing the tequila with powdered drink mix. We were too lazy to go down the hall for more water to make drink mix properly, so we started putting a scoop of the powder in each glass of tequila.

Maybe we should have used Tang.

I run around the house in my underwear all the time..is that not normal?

That was fucking funny. I stalked you here by way of Mighty D.

Congrats on the free time, as scarce as it still may be. I still remember the wonders of Tang. Had it again a few months ago at a hotel's continental breakfast when I was suckered into taking some of their "orange juice". Could not finish the glass.

Learning to cook would be a good thing, but then that means you'll actually have to do it. That's what I'm struggling with right now, in fact.

Ok, I too thought of the Coneheads when I read about the Tang.

Forget the self-help books, fiction is a much better read.

Congrats on the free time! We all need some time to ourselves every now and then. And if you chose to blog - well, we benefit with more good posts from you. We all make out.

I love how you're daintily holding your pinky finger straight as you chug straight from the bottle in an unparralled display of both proper etiquette and absolute gluttony!

they are trying to rot those babies sweet little teeth out at preschool!!

Tequila - Looks like you got off easy. The last time I drank it I chose to snack on copious amounts of bright orange, no-name cheesies resulting in day-glo orange vomit.

Free time - I'd go with number four but perhaps incorporate a bubble bath somewhere in there.

Giving children Tang - wtf?! I agree with Miss Kendra - who decided on that bit of nonsense? (Said the self-professed junk-foodaholic, but I mean really.)