Well, I aged 20 years, but I did survive the Wombat Invasion.

In my last post, I told you Common Wombat would be staying at my house for the weekend. I won't lie to you, I was scared shitless. Surprisingly, though, the weekend passed without the loss of a single human life--I consider that a success. However, my neighbors did object strenuously to having this miscreant near their homes. They didn't care for the sight of him stumbling around the neighborhood in nothing but a filthy, open bathrobe, chain-smoking and making passes at the neighborhood children. They called the police no fewer than 6 times to report a foul odor emanating from my house. And when 18 of the neighborhood pets went missing in a single evening, they all seemed to agree he had a hand in it.

Jake seemed to really take to him, though. The good news: Wombat potty-trained him in one weekend, which is impressive considering Jake is only 20 months old. The bad news: Now Jake sits on the toilet for an hour at a stretch, reading Hustler magazines and cursing at no one in particular, and smearing the walls with misogynistic graffitti.

I knew you’d want to see some photos from the weekend, so I have several to share—some were taken with my digital camera, some were taken by police investigators. In this first one, a trained hostage negotiator might notice that something’s definitely amiss. Here we are in the abandoned warehouse where Wombat dragged me, kicking and screaming, and proceeded to hold me hostage for a time, in an attempt to elicit an astronomical ransom from my panicked loved ones. 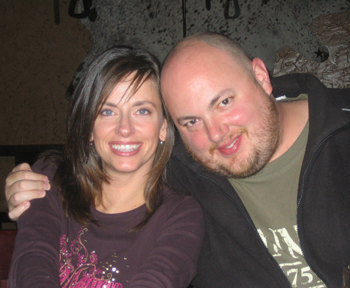 You can see the meanacing grip he has on my now-bruised arm. You can see my brave smile as I try to broadcast to my family that I am so far unharmed. What you can’t see is the gun Wombat is jamming into my ribs under the table—nor the suspicious brown stain on the back of his pants. All ended well, though, when, just moments after this picture was taken, I shouted, “Look! A balloon!” which caused Wombat to spin around, delighted, searching for said balloon, giving me an opportunity to take the gun from him and pistol whip him unconscious. Later, I forgave him for kidnapping me, and he forgave me for pistol whipping him, and after I forced him to change into a clean pair of pants, a group of us went to a martini bar for drinks.

Much, much more happened, but I’m still too exhausted to recount it all in one sitting. Stay tuned for parts 2 through 9,267 of The Stench That Ruined My Wall-To-Wall Carpeting….

you're the one on the right?

I love your Wombat bashing stories. He's a great sport and I can tell you two really are friends (when he's not holding you hostage, that is...)

Wow. I guess people really do begin to look like their pets.

I may have forgiven you for the pistol whipping, but I'll never forgive you for making me change into clean pants. I feel naked without abrasive crust on my ass.

By the way, notice how my head is roughly 8 times the size of Karla's? That's pure cranial capacity, baby. I have 300% more brain power than the average human. Not that I'm using any of it. I'm just saying, I could if I wanted to.

Glad you survived the invasion. Make sure to keep all the evidence for the pending court case...

i still don't believe that all is ok. you are either now a were-wombat or rendering all that 'cranial capacity' to a uniform suet-tallow to make a human slip-and-slide down the length of your hallway.
you know what gave it away? when you said that he spun around to look at the balloon! let's please keep this story to the realm of the probable...

I'll be coming to your place tomorrow to investigate this matter. Should only take me a week or two.

okay so when do the rest of us get a chance to drag you off to a warehouse for hostage cupcakes?

You are so brave, dare I say, and an inspiration to us all.

Thank God you narrowly escaped with your life. I can tell by the picture that you will need extensive counseling for your Post Traumatic Stress Disorder. Hang in there. I know it will be a rough road, but the key is to "reframe" the situation. Try to envision scenarios where you are in control- e.g., shoving the gun up Wombat's ass (if you're able to get past the crust and all), etc. After replaying this scenario over and over, it will replace the actual one, and you'll be cured. Until the next time.

alright, i don't have anything witty to say. surprise, suprise. Except this. You are one pretty girl there Karla! :)

Wombat's sole contribution to your household involved someone's bowels. Why am I not surprised?

Notice how nobody comments on how pretty I am? I gotta start hanging out with ass-ugly bloggers so I can be the pretty one.

Write me if you are nastier looking than the back end of a syphalitic donkey. We'll hang out. Beers are on me.

thank god you survived! I was on the edge of my desk chair waiting to find out! :O)

Wow. You're holding up well

methinks you doth protest too much (finally! a use for my humanities degree!) and by that i mean it is obvious that you totally slept with him.

If you did sleep with him, though, I'd bet that there's some scientists out there in the world that are SUPER excited about discovering and putting their name on whatever brand-new STD the two of you created.

hey. anyone else starting to get the feeling that karla and wombat may actually be friends? if so, gosh, look at the abuse heaped upon him. seems like he's got some thick skin, but still.. i'm with you wombat!! holding a gun to someones ribs is just another way of saying 'look how sensitive i am! i am nuanced and complicated, and enjoy spending time with those who don't quite understand me..'

I like his dew, I have the same one; just the mad scientist version. This is probably the 20th+ post I've seen of various bloggers meeting up and having a hoot.