Note that in the 2005 Best of Blogs list, Anonymous Coworker is said to be funnier than me, which is absurd. Sure, he's funny, but funnier than me? Ha!

Heck, this is the most I've ever laughed at the guy. Oh, I'm kidding. He's funny all right. Just not funnier than me.

At any rate, because I didn't originally make the final cut, my loyal minions stormed the Capitol and rioted, causing Bloglaughs to rethink their decision, and hastily add me. Thank you, my faithful readers. It's nice to know you scare someone other than me.

Back to the aforementioned review of Karlababble. As you might suspect, I do have some criticisms about their criticisms of me. First, one of them called me a mommy blogger, which I object to. Sure, the subject of baby poop has cropped up once or twice in this blog, but mostly I was using it to describe Dyckerson's writing. Truly, though, I think mommy bloggers write mostly about their children. I write mostly about the reasons I think 99% of the people in the world should die while I continue to live on. That's hardly maternal, in my opinion. And the subject of embarrassing public lactation or cracked nipples hasn't showed up here once, which I think pretty much says it all. 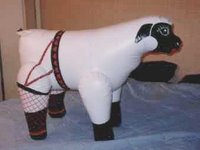 asked if they'd read my blog again, most of the reviewers, clearly intelligent and profound, said something along the lines of "yes." One of them, however, answered, "Uhhhhhhhh, no."” I must assume the garbled syllable at the beginning of that answer was a result of the inflatable sheep he was stuffing into his mouth at the time the question was asked. Otherwise, his answer might have sounded more like, "Of course, she's a goddamn genius!" So I'll give him a pass on that one. I can't speak well with latex stuffed in my mouth, either. 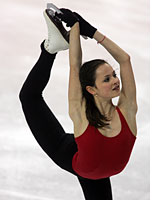 All in all, it was a favorable review, which is a nice thing to have. It's something I can come back and re-read when I'm feeling "less than." Like when I ask Jake if he wants me to sing the Alphabet Song, and he violently shakes his head "no," implying that hearing me sing is something one would choose only if asked to choose between that and having one's foot shoved in a blender set on "puree." Or after a demoralizing chat session with Wombat, where he regularly calls me things like "horseface nutpants" or "shitsock." My only regret is that the Bloglaughs reviewers failed to mention how I nailed the triple-axle and really stuck the landing. True, my skating is sometimes a little choppy thanks to the knee injury I suffered two years ago on the parallel bars, but most judges agree my comebackck is nothing short of miraculous. The doctors all said I'd never skate again.
Posted by karla at 10:32 AM

What does this mean? Did they even read your blog?

I agree. No sippy cups, no cracked nipples= not a mommy blog.

Exactly. You two are geniuses. I applaud your geniosity.

That is an outrage, you crazy babbler! Hell, your bowel movements are funnier than anything on Anonymous Cowtipper's blog! (Seriously, I laughed my ass off at that loaf you pinched last night. What the fuck did you eat yesterday??!)

And for the record, I'd eschew on your cracked nipples any day...

Karla, since you invited yourself to our Thanksgiving dinner, I think we need to ask you to bring something.

Howzabout some methamphetamine? It's almost unknown here, so there's a huge untapped market ... and even half of your stash'd probably keep the state economy humming for a few decades.

I made one post regarding NOT being a mommy blogger and I used the phrase "nipple scabs" now I constantly get hits from people googleing the term. I'm sure they are less than thrilled when they stumble upon my profanity laden posts. Oh well! Fuck 'em!

(ps. bloglaughs is the reason I found your blog, but I've lost a bit of respect for them since they didn't crucify Perez Hilton)

I am envious of the review you got. You make the rest of us look like we're all standing still, my dear.

i can *totally* speak with latex shoved in my mouth ...

and why all the mommy blog hate? i'm pretty sure we cornered the market and shoved a nipple in its mouth ...

Hmmm, they forgot to mention your the Mommy Blogger who willingly tosses her prestine public persona to go fucking NINsane at Metallica concerts.

I've got a little Jake at home too, and bloglaughs thinks that my Jake is funnier than yours.

I need minions. Where'd you get yours? Are they much trouble to keep? Are they self-cleaning? Can they be spayed or neutered?

Much applause on the shout-out. You are damn funny.
For a Texan.

Why do I have the shudder-inducing suspicion that the picture of an inflatable sheep was not found through a Google search, but in fact snapped in your very own bedroom?

Forget "Horseface Nutpants," You will now be known to me as "Dingledoink Sheepfucker."

"Dingledoink" is a little bit of artistic liscense on my part expressing the fact that I suspect you have a penis. I saw the bulge. Don't deny it.

Look on the bright side: Pre-op tranny's can't be "mommy bloggers."

Hey, don't get mad at me just because you're a mommy-blogger.

Carla-
My favourite is that someone constructed the sentence including "I ENJOYED THE COCK SOUP." The fact that your work spawned that sentence alone is enough for me.

Now don't be spiteful of people who are obviously not intelligent enough to understand your high level of humor.

Some people just might be kind of pissed off that you "want them to die while you live on." Just a warning, but I've heard that type of thing tends to alienate people.

thankyou karla. you've made me speechless..i'm glad that you read my posts. i appreciate that you actually went back and read all of my posts, even if you skimmed through them.
thankyou for crying with me..for me...it means the world to me.
i'm just another human just like everyone else. but it makes me proud if i can give anyone hope...even if its just one person.
thankyou so much.
God Bless.

I would imagine a few of our reviewers only spend 10 minutes at a site before spewing their opinions.

There's really nothing I can do about it except tell people to take our reviews with a grain of salt.

Some of the comments I've published are ridiculous. I'm very aware of that.

That's kind of fun when the reviewed site sucks, but it's difficult when I actually like the site. Of course, I'm such a liberal I feel like I have to provide all opinions even if some of them are uninformed.

BlogLaughs was originally intended to be a starting point for an open, honest conversation about the most humorous blogs on the Internet.

Instead, our readers almost never comment. It's much too one-sided. The whole thing didn't quite turn out like I had hoped.

It may get a big bump when people start talking about the annual awards, but I'm pretty burned out.

ACW: I am SO going to bite you on the ankle if I ever meet you.

Damn you! Your post triggered visible lactation through my muscle tee. How embarassing and irritating! I need you to send me some Chapstick for my nipples now.

I am so embarrassed. This whole time I thought you were an "ass skater."