This could be the last post I ever write

Ever have a really horrific experience with a houseguest? Was there ever a time when you generously opened your home to a friend or family member, only to have things quickly spiral into madness once it became apparent that the houseguest was rude, thoughtless, ungrateful, messy, and possibly dangerous as well?

If you've been a reader for awhile now, you may recall that I narrowly escaped death last time this creep was in town. But just because I made it out alive that time doesn't guarantee I will fare so well this time--after all, we only met up for dinner that time. This time he'll be staying at my house. I shudder at the thought.

But don't worry; I've taken some precautions. I'm not so naive that I would let a shady character like this stay at my house for the weekend without taking some steps to ensure my family and I live to see Monday morning. Here are a few of the protective measures I've taken:

-I've rented a port-a-potty for him to use.

I don't think my (or anyone else's) body produces enough antibodies to battle the kind of superbacteria this guy's nether regions are breeding.

-To prevent him from "accidentally" forgetting to use the port-a-potty, I've had both bathrooms in our house destroyed. Rebuilding again them after Wombat leaves will be expensive, but like my grandma always said, avoiding hepatitis C is priceless.

-I've hired 6 off-duty police officers, 3 firefighters and 5 EMT workers to stay at my house around the clock for the whole weekend. It's comforting to know they'll be here in case my houseguest causes a true disaster, but the bonus is they'll be able to help me keep an eye on him to make sure he doesn't steal anything. As an extra precaution, I've taken inventory (including photos) of my panty drawers.

-I've retooled and updated my will. If Wombat should kill me during the course of his stay, whatever personal belongings of mine that aren't ruined by blood splatter during the murder will go to my sister and niece in Alaska.

-I've scattered several dead animals around the house and yard. Hopefully, these will satisfy his thirst for blood and keep him from turning to me and my family for sustenance.

-I've tented off the room he'll be staying in. It looks like a nuclear 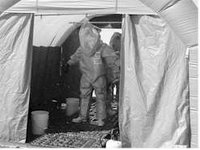 quarantine area, which clashes with the rest of my decor, but my policy is "safety first." After Wombat leaves (or is shot down by police helicopter), I'll burn the furniture in that room and put the house up for sale.

Have I missed anything? Should I alert the FBI now, just so there's a record they can look back on if anything illegal or fatal should occur? Your input is appreciated.

In the meantime, to illustrate just how messed up this dude is, let me show you the picture he sent to my cell phone about an hour ago: 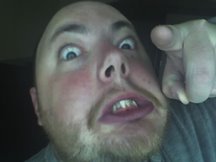 What IS this? Is it a picture of his penis? Is it a dead animal? Did he just point the camera toward the toilet and take a photo? I don't know exactly what this is a picture of, but I know it's something dirty and wrong. Did I make a mistake inviting this loon to my home? I really need to think before I speak from now on.
Posted by karla at 3:48 PM

I don't get anything in the will?

I am something of an expert on this subject, having watched 50 episodes of "A Haunting." What you're going to need is some sage, an Indian, some priests, one of those Cetaphil-looking bottles of Holy Water. (maybe you can borrow his lube instead?) GOOD LUCK.

From what I've read on his blog, destroying the restrooms is by no means a guarantee that he's not going to relieve himself indoors.

i am really offended that i haven't received any such photos.

and i believe it is a photo of his penis clutched by a dead animal in the toilet.

Even though you got a port-a-potty, make sure you have plenty of plungers on hand.

I'm not sure how or why you'll need them, but I've read his blog too and this is Crap Master Flash you are dealing with here -- plungers should be every five feet or so.

I think you best reserve some corner spaces for the kegs of beer he's going to have shipped to your house prior to his arrival.

Oh, and don't forget the digicam for the beerfest that ensues shortly thereafter.

Well, at least Wombat is being made to feel welcome. What more can you do?

It's been nice reading you(r blog).

Per an old Lifetime* (* that a "friend" told me about, since I NEVER watch that horrible estrogen-laden channel) movie, allow me to recommend an additional measure.

Purchase 50-sheets or so of 4x8 plywood, heavy-duty constuction adhesive and wood screws. While the Wombat is "sleeping it off", construct a sealed tunnel from the only exit* (* board-up any additional openings first) from his "lair" into a coffin-sized shipping container. It is not necessary to drill air holes or modify it for creature comforts. Place several pickled pigs' feet in the container as bait.

This will help you to avoid those awkward goodbyes, as well as any future visits, posts or comments.

Make sure Jake has no blood splatter on him, I want the kid!

Well, I suppose if you'd let a deranged freak like that into your home, I should at least be able to get to third base. And don't worry about the dead animals - I carry a fresh supply with me at all times...

Maybe a nice doormat with a cute saying for wiping his feet. Digging shallow graves can be messy work.

Destroying the bathrooms was a good idea. Hell, you would have had to do it after he used them anyway. have you ever read his blog? I'm surprised he doesn't just buy diapers.

I hope everything works out for you.

If things get too crazy, just remember that you can always set the house on fire and run away...

I'm typing this FROM the karlababble inner sanctum, which is to say, from atop the pile of severed hands and used tampons that passes for a desk around here.

Let me put to rest any fears that I am planning to kill Karla. Don't get me wrong, I thought about it, but i figure anyone who has lived as hard as this chick has should be effectively impossible to kill. I mean, if all the herpes, dirty needles, jail-cell brawls and the entire Dallas Cowboy defensive line hasn't put her in the ground, what chance do I have?

I WILL kill her family and friends though. I mean, why waste a trip?

Destroying the toilets was a great idea, but I'll have that port-a-potty filled up in a day. After that... Let me just say that I've seen her and Brian's bed, and it looks VERY absorbent.

Inventorying the panty drawer would have been a great idea if I was planning on taking stuff, but I'll be LEAVING stuff in there (my own soiled undies, severed ears, etc). Wombat:1, Karla:0!

I'm sending you an old priest, a young priest, the world's biggest bottle of Febreeze and the best of luck.

OMG RUN! He borrowed my REVOLVER FOR THE TRIP KARLA! He's going to SHOOT YOU!

Karla, if you and your family need to escape to Houston, we'll protect you. You'll have to work my cheesy garage sale, but it's safer than being eaten by Wombat. You are in my prayers...

Better you than any of us, Karla. Godspeed.

please make sure i get your oatmeal recipe in your will...

Looking forward to the posts on your blog and his, about the visit:)

mr fab...don't worry about inheritances. they're not all they're cracked up to be.

karla...the dude in that pic looks like he's got gas or something - better stock up on pepto too.