Prostitutes don't usually smell of urine, do they?

There's still more to tell you about that weekend Common Wombat stayed at my house. I know I told you some of it here, and some of it there, and you may have thought you got the full story, but oh, no. Not by a long shot. It's just that it's painful to relive those dark days, and I found it difficult to tell the horrific tale all at once. In addition, some of the more heinous memories were repressed, but are now slowly coming out in the 4-times-daily therapy sessions I've had to attend since The Weekend I Lost Faith In Humanity.

Have you read any of Wombat's blog? If not, good for you. It's all a pack of lies anyway. For instance, he claims not to be much of a drinker. That's why I was shocked and aghast to see him pounding down drink after drink at the bar we went to--he was even snatching drinks off the waitress's cocktail tray as she tried to walk past our table. Twice he yanked half-empty drinks right out of the hands of other patrons, both of whom were too shocked and fearful to do anything but settle their tabs and quickly leave, sensing a booze-fueled catastrophe was imminent. I've never been to Baltimore, but perhaps this kind of assholery is common there. We southerners are a kind and gentle people, and this type of bizarre, aggressive behavior is utterly foreign to our peaceful nature.

In the photo below, observe the drunk, belligerent look on his face. He's obviously loaded and looking for a fight. And notice he's got two drinks--a martini and a beer. You would have thought he'd been told that was the last day alcohol would exist anywhere on earth, and he'd better get his fill of it. 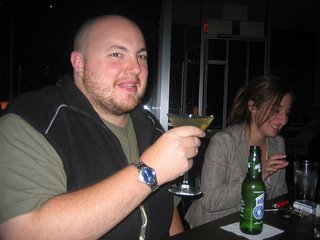 You can see my friend Kristina on the right, nervously grabbing her own drink, aware that she only has a few seconds left to enjoy it before this lumbering boozehound gulps it down and then belches rudely in her face.

My friends and I had the good sense to usher this lush out of the bar before things got too far out of hand. But he angrily insisted that we stop and pick up some Schlitz Malt Liquor and some Mad Dog 20/20 for him to drink at my house, so we did. Our strategy was along the lines of, "Just do what this crackpot asks, and try to make it through the weekend alive." We hoped he'd drink himself into a stupor fairly quickly and the miserable night would end.

But we underestimated him. Once we got home, things got even more warped and strange. He pulled an assortment of costumes out of his suitcase and demanded we engage in role-playing with him! While he was outfitting Brian in a wooly sheep costume, I snuck off with my cell phone and tried to dial 911. But Wombat quickly found me, crouched in my closet, sobbing as I fumbled with the buttons on my phone. He stomped all our cell phones to tiny bits and then got back to the costumes.

He flew into a drunken rage when he realized he'd forgotten to pack the staff and bonnet for the Little Bo Peep costume he wanted to wear. Frightened and hoping to placate him, we frantically tried to assure him that we could fashion a makeshift staff out of a broom, and make a bonnet out of a pair of the lace cotton bloomers he wears as underwear, but he was inconsolable. But when Kristina finally put on the police hat he had given her just before his mental breakdown, he cheered up instantly and announced that we could play, "The Very Naughty Prostitute." We didn't know what the hell that was, but we felt certain we had narrowly escaped being slaughtered, so we were simply grateful his mood had changed.

Below is a photo Wombat demanded I take of him dressed as the prostitute, and my friend Kristina as the cop. 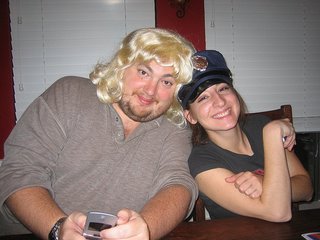 It took 17 tries to produce this photo; in the first 16 shots, Kristina is visibly upset, either weeping or cowering in fear. After each digital shot was taken, Wombat would review it and scream, "NO! I told you to look HAPPY!" My heart went out to my poor, terrified friend as she tried her best to do what the crazed lunatic asked, clearly aware that all our lives hung in the balance. I tell you, we were all scared out of our minds. At one point I smelled urine and thought, "Well, one of us finally peed ourselves in fear. Who could blame us?" A quick downward glance, however, revealed that it was Wombat who had peed himself. Apparently the sight of the wooly sheep suit got him so excited he couldn't stop himself.

Well, that's all I can tell you for now. Not because I'm still too shell-shocked to face what happened (although that's partly true as well), but because I'm still scrubbing the mysterious greyish-yellow stains Wombat left on most of our furniture. Since I'm not sure exactly what these stains are, can anyone recommend a household cleaner that successfully removes puke, semen and squirrel intestines?
Posted by karla at 9:50 PM

Let me know if you end up tossing any of that furniture. I'm looking to redecorate my place in a greyish-yellow urine/semen motif.

BTW, who is this Kristina babe??! Va va va VOOOOM! Dyckerson is in LUV, you crazy babbler!!

I soooo want to party with you guys...

Man, I wish one of the bloggers I've met would viciously slander me. That would be awesome.

I'm into moderate role play. For instance, I'd be the club bouncer and Kristina would be the patron I'd pat down looking for weapons.

You two are simply mad. Fun to watch though.

It's like the prison version of the Village People.

Say, you didn't happen to play a game where Wombat dressed your friend Kristina up in a Catholic school girl uniform? If so, post those pics post haste.

I can assure you that kind of assholery IS common in Baltimore, BUT even here Wombat is infamous for such behavior.

wombat is a HOTT blonde.

LOL, that Little Bo Peep pic is hilarious and a beer drinker to boot; good times in the neighourhood.

Wombat's eHARMony profile ("Blanche from Baltimore")made no mention of her (his?) propensity for prostitution. It did reveal the urine issue, but not that it's a WIG, for Chrissakes! It pays to be careful online.

Yeah, do you get paid for this shit?

Ya know you should..

I went over to Billy Mays-Hays' house to ask him about your quandary... He assured me that Oxy-clean could easily handle the urine and semem, but was less sure about the squirrel guts... Then I killed him... I think two thank you’s are in order…

I think it would be best to just set a match to the whole place. Probably nothing salvable.

I would have to assume for such a hot looking blond you'd have to pay extra, smelling like urine or not.....

wait until you see how many search engine response you get from your title alone. Hopefully, you will share.

You might try Kaboom on the stains. I don't know that it will work but, as cleaning products go, it has a pretty cool name.

It's amazing you are still here to tell the tale.

Oh, my. That guy does look like quite a handful!

I don't even know any of these people and this was hilarious! I wanna come next time you all go out. :)

Thanks for visiting my blog and offering your child to me. That is a very giving thing during this holiday season!

Karla, the only thing more frightening than your multiple accounts of Wombat's visit is the sight of him in that blonde wig. I'm going to need a pill to stop the nightmares.