I just returned from the doctor's office, where Brian insisted I go to get a full examination to determine if there was any permanent scarring or other bodily damage from the horrific events of the weekend with Wombat. While I was there, I insisted they bathe me in lye soap just to be sure all bacteria were thoroughly eliminated. I still think I'm a long way from feeling 100%--but with a few years of physical therapy and a reliable support group, I may be functional in society again soon. I think pills and booze will really help, too.

One thing I did learn about Wombat is that he is quite virile. For some reason I was picturing him as someone too busy with internet porn and fantasies about his mother to go out in the world and function sexually with an actual partner. I was dead wrong. The moment he arrived in the Lone Star State, he began ranting about "spreading [his] seed all across Texas." Naturally, I thought he meant that he was going to go out looking for women, which surprised and appalled me since I know he's married. To my relief, it turns out he was not interested in finding a woman, after all. To my horror, I accidentally walked in on him with the partner he ended up finding to satisfy his sexual appetite. I was shocked, but not so shocked that I forgot to snap a picture: 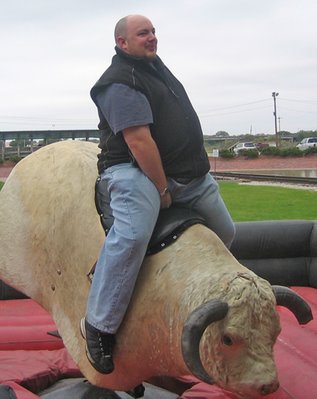 Beastiality is unforgivable, sick, and just plain wrong. But not being smart enough to know the difference between a real bull and a mechanical bull? That's pathetic. I'm ashamed to know this person. For Christ's sake, the thing is hollow in the back: ...or maybe that's what he liked about it? Pervert.

So you tell me: How am I supposed to put this event behind me? I trusted this person, welcomed him into my home as a friend. To find out what a degenerate he is has really broken my faith in humanity. Now I'm starting to scrutinize all my friends a little more closely. I can no longer give my friendship and trust so readily. I do feel I've learned some valuable lessons from this experience, and that's always a good thing, but the sad part is that I feel I've lost so much of the wide-eyed innocence I had. I want to go back to being the loving, caring person I was, but I don't think that can ever happen now. I'll never look at people, or mechanical bulls, the same way again.

Do you think he would go out with me?

Or the bull even.

I'm going through a dry spell.

Is it ANY consolation to say that it kind of looks like the bull is enjoying it? No, it's not? That's really skeevy of me to say? Did I mention I'm so, so sorry?

Where was that taken? A train station??! Christ, that must be Texas.

I think this picture would look best if the Mexican mannequin was somehow riding along or cheering from the side lines....
~G

I just want to point out that Karla tells filthy lies and those pictures are being taken out of context. If you could only see the complete series of photos, you would be able to clearly tell that:

a) The bull raped ME.

b) It was absolutely the best Texan train station mechanical bull rape I have EVER had. I get the shivers just thinking about it. When Karla says she's going to show you a good time, she really means it.

Everyone should visit Karla in Texas and have her take you to get repeatedly sodomized my a robot animal.

Please tell me the bull's horn was broken before he arrived. On second thought, nevermind. I need to go take a long shower.

How do you get past it, you ask? Do the "andy-forget your tragic past Special!" All you need is a bottle of Watermelon Pucker, A half-used asthma inhaler, a lighter, and a spoon. Then, sit back and let the amnesia roll over you. That's bliss my friend.

You really should consider offering to pay for therapy for the bull.

I can't even begin to imagine how traumatized the poor thing is.

I think your plan about the pills and booze is probably the best way to get past this. I find that living life in a drunken blur helps to dull traumatic memories.

that bull is clearly asking for it, parading around in no pants like that.

To be quite frank, Karla, I'm shocked. How can you so much as complain about all of this when you actually subjected yourself to it in the first place? I mean, you allowed him to sleep under your roof even AFTER he was featured on Dateline's "To Catch A Predator"?! Unbelievable.

Cruncy BC: Do you have any ideas as to how to get Wombat to take a long shower?

Violet: I like the way you think. Do you do any babysitting? I'm always looking for a good one.

Jessica: I started to laugh at your "joke," but then I realized Wombat does look a lot like one of the guys I saw on that show recently.

So, did yall go out to NASCAR on the weekend? They had a bull something like that in the hospitality area. Where did yall sit or were ya lucky and got in the Pit? Just wondering

Still, truth be told, it's still less creepier than those "au naturale" pix taken of him on the rides in front of the drug store.

I think I recognize that bull! Is his name Moonshadow?

And you guys call us California Crazies... that was pretty damn funny right there. Good 2C he NINjoyed his visit with you sickos. :)

Beastiality may be unforgivable, sick, and just plain wrong -- but, is it illegal in Texas?

Would have had a bit more zing to snap a pic of him bent over the backside of that bull:)