I am a thoughtful friend.

The other day, my friend Brooks left his hoodie sweatshirt behind when he took off to do whatever it is that he does when he's out of my sight. As I sat there idly looking at his plain black sweatshirt, I got to thinking about him. Brooks is a quiet guy, intelligent and thoughtful. He's not the kind of person who wants to be the center of attention, and certainly not someone who wears his heart on his sleeve. If you want to get to know Brooks, you have to be patient, because you're not going to figure him out in one day. You know how there are some people that you seem to know everything about in the first 5 minutes of meeting them? Not Brooks. But he's so worth the effort. Once you get to know him he's funny and friendly and kind and interesting, and just plain great in general--but upon first meeting him, you wouldn't understand all that, not yet.

And there's nothing wrong with that, of course. But I love Brooks, and I just wish more people knew him the way I know him. I sat there and thought to myself, "What can I do help broadcast the truth about the real Brooks?" It would have to be something people could recognize immediately upon seeing him for the first time, the way a big, broad smile lets you know that a person is friendly and approachable. Then it hit me. I could personalize that simple black sweatshirt for him in such a way that it telegraphed to the world "I am Brooks, and here's what I'm about."

So I did it. I put some vinyl letters on the back of his sweatshirt--just a few concise words, not a whole book-length speech. Just a simple statement to distill my friend Brooks down to the core element of his personality, the thing that really makes Brooks "Brooks." I did it out of love. I am that kind of friend.

And then I had another friend model the new-and-improved sweatshirt so I could get a picture of it for a memento. 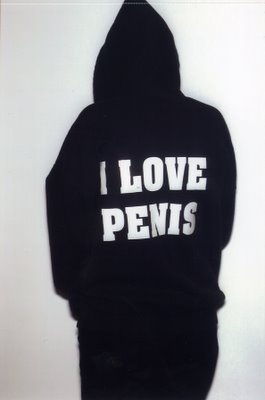 HA HA that is hilarious. Oh, gosh you crack me up.

Karla, I want you to be the mother of my children.

You are indeed thoughtful. Everyone should have at least one friend like you.


vdqcjgh. May I buy a vowel, please?

ROFL what a great friend you are :0)

That is f-ing awsome. I need more friends like you... well I'd settle for "a" friend like you.

That was wild! Love it. Hope it is a joke.

You should see if you can get a laundromat to starch his underwear.

As I've gotten to know you over the past few months, there have been times that it has made me very very sad that there are some 2000 miles or so between us, because I wish I could hang out with you from time to time.

Then there are times like this, when I realize that 2000 miles is the only thing keeping me safe from insane stunts like that, and I thank God in his infinite wisdom for putting Baltimore so far, so comfortingly far, fom Dallas.

Oh, hahaha! I didn't see where that one was going at ALL! I'm sure Brooks REALLY appreciates your friendship about now. (grin)

Margo of Mystery and Mayhem said...

I love it! Now I'm buying vinyl letters for Christmas and will masquerade as a thoughtful friend, even if it was your thoughtful idea.

WHere are all MY brillianty thoughful and hilarious friends? That is too fucking hilarious.

Clearly, you are everything I have ever wanted to be.

you ARE a thoughtful friend.

i would like one of those in green please.

Fucking hilarious, Karla. I'm so glad to know that the art of the prank is still going strong. You crack my ass up!

Truly a gift from the heart -- er, well, the general area, anyway. I bet he was touched...

well, in a way it's very altruistic, because I'm sure that Brooks is going to make a lot of new friends....whether he wants them or not is a different matter.

It's the thought that counts?

Hah...for some reason this reminds me of the time my dad and I were having lunch at a nearby restaurant and this woman was wearing a shirt that proudly and boldly proclaimed on the back: "Vagina Warrior"

My dad thoughtfully contemplated this and then said, "Think I should ask to see her weapon?"

I ALSO love penis. Could you arrange for me to meet your friend?

Thats was f-ing funny as hell!!! I didn't see that coming!

Also, I really do like your blog. You are a very intelligent writer, with a great sense of humor! Thanks!

It's probably not a good thing that you've been so open about your fear of insects.

This reminded me of a little prank I pulled on a dear friend of mine. I love this friend dearly, even though he can be a moody shit sometimes. He is a good looking guy, but a tad on the feminine side...definately not a "man's man" by any means. He is the furthest thing from gay, although for some reason, his looks and the way he carries himself makes his sexuality questionable from time to time.

Anyway, for his birthday last year, I had a shirt made up for him (because I scoured the internet looking for one and couldn't find it). I had it made and shipped it to him at work, where he opened it in front of most of his co-workers. They all died laughing...I think I got a chuckle out of him, too. The shirt? Simply said, "Sorry boys, I eat pussy."

i'm a thoughtful friend too!

I'm sure Brooks sees your friendship as one of the true blessings of the holiday season and when he's done with whatever he's planning with the bugs, um, I'm sure you'll appreciate him in just the same way. :)

But the question here is...does Brooks appreciate your friendship and humor as much as you do his? LOL That is great! Stacie

Hey Karla, would you help Ellen out by plugging her blog for the last day of voting? SHe's neck and neck with the competition, and it'd be great to have her win!

Go to http://thereignofellen.blogspot.com and follow the link at hte top right corner to vote.

From a fellow Queen of Ellen's court! :)

I know he appreciated the thought and effort you put into "helping" the world understand him better. Can sainthood be far behind for you?

Can't take you anywhere Texas Gurl. Actually that cracked me up.

I'm sure Brooks will love you, too.

Karla, that was pure genius..your stuff is always worth the wait. Watch your back though, sounds like Brooks has something up his pants leg ....

Karla, what would I do without you??