Your prizes are on the way!

It's time to announce the winners of October's caption contest! When asked to find a funny, lighthearted way to interpret the horrible, possibly illegal picture I took of my son, you rose to the occasion like yeast rises in a Mexican border town prostitute's panties.

First prize goes to Soapbox Superstar, for this entry:

Pot-Luck (just not so lucky for some)

Congratulations, Superstar! As you surely remember, the first prize is my son, Jake. You are now the mother of a cheerful, chatty, snaggle-toothed infant. You can look forward to many exciting times ahead, especially if you like being repeatedly rammed in the shins with a walker that looks like a car. 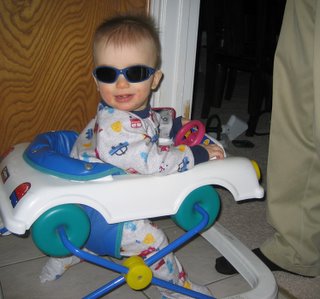 Nothing that's less than 18 inches off the ground is safe from the grubby hands of my--ha! I mean YOUR--precocious young son. Just beware of his fecal hijinks. He's well-known and feared for his diaper pranks, also referred to as "Trick or Worse Trick."

My dear friend Donna (also known as Boom, Boomer, or by any one of the hundreds of aliases she rotates through in an effort to evade capture and subsequent death by lethal injection) slides into second place with her entry:

"Wait 'til you see the special sauce I'm cooking up down here!"

Donna might have taken first place if not for the fact that she stubbornly refuses to get a blog of her own for me to link to here, in spite of the ridiculously long list of stories she could tell you that would no doubt blow your collective mind. If you ever see her on the street, ask her the meaning of this phrase from her past: "Actually, it tasted kinda salty." But I recommend only asking on an empty stomach.

Donna, since you and I have been friends since we were little kids, I thought your prize should be something more personal. I thought of giving you my virginity, but we both know where that went. So I've decided to give you my liver. It's in about the same sorry shape yours is in, but I figure if you put the two of them together, you'll almost have the equivalent of one healthy, functioning organ. I thought about giving you my dignity as well, but that's in worse shape than my liver, and in your hands it would be reduced to charred tatters in about a week and a half. So take the liver and be happy with that.

And third place goes to Lee, for this caption:

What do you call a baby boiling in a pot?

Admittedly, it would have been funnier if my kid were actually named Stuart. Lee, you should talk to Soapbox Superstar; once she has legal custody of Jake, she may consider changing his name. The third prize is a lifetime subscription to www.karlababble.com! That's right, you won't ever have to pay monthly dues again! Really, this should have been first prize, now that I think about it.

As you can see, I'm in the process of packing the first prize to send off to Soapbox Superstar. Am I supposed to cut air holes in the box? How much should I insure it for? If anyone has any experience shipping human children via the US Mail, I'd appreciate any advice you can give. 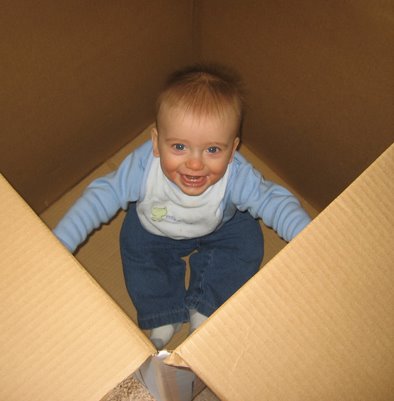 Email ThisBlogThis!Share to TwitterShare to FacebookShare to Pinterest
Labels: The internet--it's more than just pornography, The Karlababble Household

Don't forget to pack him some snacks.

How come he looks so happy to go? Doesn't that worry you ;-)

I reccomend wrapping him tightly in bubble wrap before boxing him up. That will serve to protect him during shipping, plus he can bite through individual bubbles for tiny gulps of precious air.

Word to the wise: That's going to be at least 10 stamps.

When you figure out how to mail a kid via air mail, let me know. Mine needs to be shipped somewhere. Anywhere.

He is such a cutie. Soapbox Superstar is SO lucky!

I am crying. I don't know if it is from the laughter brought on by this post, or at the thought of having a third child.

Either way, I will make sure to take care of him with the same love as I do for my own. If he is here in time for Xmas, I'll make sure to take him to see Santa like I did for Ashton here: http://www.thescanlons.net/weblog/index.php/weblog/mean_santa/ and then post it for all of the internet to see, as I have done for the son I am already in possession of.

see you little guy....you're on your way to a better life

He does look entirely too happy at the prospect of being boxed up--so cute!

dammit, i really needed that kid for phase two of my plan.

you better pop out a new one, and remember... i like red heads.

Very cool with the shades!

I've never shipped a human before (though there are a few out there I'd really like to) and the only advice I can offer is to stop by your local post office... they are usually very helpful.

Karla.....you are not SERIOUSLY going to the post office again, are you?

i cant wait to read the post-blog after you go to the post office for this one.

and I LOVE the picture of Jake in the box...he's so cute and smiley - send 'em to me (poopy butt and all)!

Congrats on your recent nomination of a BoB Award! Good Luck and keep up the good work!

Karla dear, let's you and me make some babies of our own....

Just my luck… win something that hasn’t worked since 1987.

I knew I had seen instructions somewhere, and after some research, found them here they are. Unfortunately, I don't see humans on the list. They should be after "hippos", but aren't.

"you rose to the occasion like yeast rises in a Mexican border town prostitute's panties." I am totally STEALING THIS PHRASE. Thank god you're not shipping him to me....he's cute and all, but I just got rid of all the testosterone in my family! It's gonna be an estrogen filled Christmas. :)

The post office may get what it finally deserves, hopefully he'll deposit a little present for all the workers. :)

By the way that child is absolutely adorable!!!!

Should the caption for this new photo be: "Guaranteed 12 hour delivery?"

Please don't send me anything if you think so. :)

New from Blammo. Baby in a box. Also see the summers favorite. . . Baby Hot Tub. It's safe, non-toxic (except for the diapers) and completely immoral and wrong. But other than that, it's the best present you kid will ever wish they didn't receive.
Only 3 payments of $19.95

taxes and shipping and handling extra. Not available in Alaska and Hawaii.

When your son gets older, if he should ever find a Way Back Machine archive equivalent with your blog cataloged; your going 2B in the Penalty Box bigtime KB. :)

Soapbox Superstar, you're so lucky. Well earned and deserved.

As for mailing the kid, I'd recommend putting some drugs in his milk, a la BA Baracus, to knock him out for the trip so he doesn't freak out being in a box for so long. Soapbox Superstar doesn't want a head case on her hands, I'm sure.

Thanks for third place, Karla.

I am, apparently, the one with the hairy hairy chest.

I'm going to count this as indirect play of "my son fits in things" -- man, I love that game.

Merry Christmas Karla and all the best for the New Year!

hi,
I Love the picture of Jake in the box...he's so cute and smiley..........
thanks for sharing nice information