I have a confession to make.

When Jake was born, he had a decent amount of hair. It was pretty dark, too, like my hair and my husband's--maybe even a little darker. Both Brian and I have dark brown hair. Jake's was a bit darker brown, bordering on blackish. Here he is on the day he was born, looking very sweet and pitiful in the NICU. As for the hair, he was clearly going for that spiky-looking, artfully messy look that can be seen on many of Hollywood's leading men. Don't ask why he was wearing pasties on his nipples--all I can say is he was going through a phase. 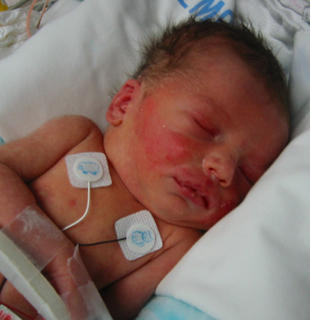 But if you have any experience with babies, you know that it's pretty common for them to be born with a head of hair, then lose most of it over the first few months, then begin to gain it back again. So it was with Jake. He started looking a bit like a baldy after a few months went by. Here he is at about 5 1/2 months, sporting his new military look. 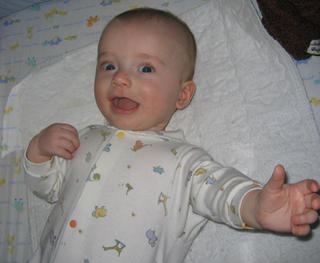 Now he's started to grow some hair again. It's growing pretty rapidly, actually. With all that hair coming in, he's starting to look...well, less like my husband. I'm almost to the point where I feel like I should confess that one night stand I had with Axl Rose, before my husband figures it out himself. 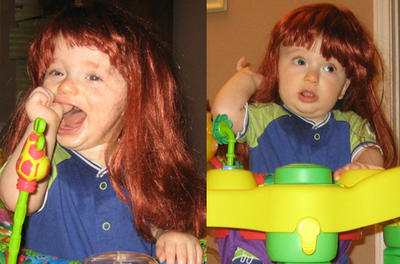 See the resemblance? It was one indiscretion, and I hope my husband can forgive me and we can make this marriage work, because something tells me Axl wouldn't be a such a great father. 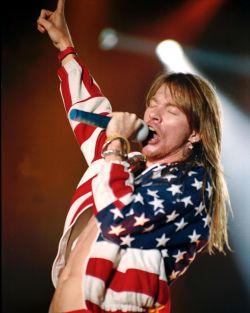 i see the resemblance. but the color leads me to wonder if it wasn't actually carrottop?

or possibly a red crayon?

You are very, very funny.

You know, i always heard Axl wasn't really that great in the sack- Slash was the one you wanted to hook up with. Please fell free to defend Axl if the rumors were untrue.

I'm also sure your husband will be OK if you file suit before Axl snorts ALL of his money. Palimony can be VERY profitable.

roflmao. I've been lurking for a few days. I LOVE your blog, I'm seriously giggling my ass off.

Love it, Too funny!

Axl would totally SUCK as a father. Do NOT confess to your husband! Jake NEEDS him LOLOL

I'm with bonanza jellybean - go for the Palimony thing! I'm sure a couple million over time will cool Brian's anger toward the situation. (Or maybe a new Harley would help?) Plus, Jake will get bonus cool points for having a rock star as his father, which will help to ensure that he's not tortured and made fun of when he's growing up. The well being of your child has to come first.

LMAO, I am so glad that my child isn't the only object of humour. I love that you did this. Very cute and makes for awesome babybook stuff. hehehe I love it! Jimmy (my boy) is sooo the object my good times. Congrats on a gorgeous, somewhat deviant resembling, boy!

i love coming to your blog- it always manages to make me LMAO!! thank you karla- thank you from the bottom of my heart :) ROFL

Thanks for the laugh.I didn't even see that coming. Hilarious!

Wow! Just how old is that picture of Axl? If it's recent, he's gotten plugs.

he looks real good karla. we use to take a lot of pictures when the kids were small.

I love, love, love that kid...even with Axl hair. AND...I will be seeing that kid more often. I'll be a Texan again by Halloween!!!
Love you and can't wait to see you.

Love it. Once again, hilarious . I didn't expect that at all.

Jake will one day grow up and see these pictures and be mortified, while you sit and laugh hysterically.

You know, I just don't believe you. Even with your husband's wig on, he doesn't look like Axl.

Wow, I am so glad you clarified that your affair was with Axl Rose, because I was definitely thinking you were going to say Ann of Green Gables. You see how that would really confuse things.

Axl can be forgiven. At least it wasn't Steven Tyler or Mick Jagger. The lips would be unmerciful.

I'm so disappointed--I would've thought you'd have hooked up with someone from, um, say--METALLICA!
;)

I see we had competing baby pics up this weekend. Maybe I'll have to do some Photoshopping. Well, then again, it's not my baby and I'm not sure how the parents would feel about their child being the latest member of KISS...

Aw, give Axl a chance. You never know he might have changed over the last decade. Is he still alive?

Axl has such long, luxurious locks. Luxo locks. Just as your young one does.
Paternity tests on the tyke may be in order, but Axl has modified his own genetic make-up through voluntary self-pickling. He's been canned by a neighborhood hobbiest named Gerta Frinkenheimer, and isn't scheduled to be consumed until Spring at the Church Bazaar.

Maybe it's me, but if that hair would've been blond, wouldn't he have looked like one of the dudes from "Nelson"?

Back in his day, Axl would have been a fine catch. Nowadays, I dunno....

Man, he looks like a completely different person in each picture! It's so scary how much babies change in such a short time!

You are fabulously warped! I love it!

I'm thinking this post was a little more serious for the likes of you and then...
keep...
scrolling...
down...

Are you kidding me? Axl Rose would be a GREAT father! He is who I will be modeling my own parental life after.

OMG! I am dying! You are a riot! Stacie

Ah, Karla. This is why I keep coming back.

I'd tell Axl about the offspring now, while he's still got more than 57 cents in the bank.

hilarious...at least he didn't start looking like slash. that hair is scary and would have raised a lot of questions! the kid could probably hide in that mop for months and never be found.

Eww, take that wig of him quick, it makes him look gross!!