It's not the first time I've been busted by a cop.

It is my natural tendency to try to always do what cops tell me to do. It's not that I'm an obedient person by nature, it's just that I like living outside the prison walls. I will do pretty much anything a cop asks me, within reason, but the kinds of orders I'm used to hearing from cops include the following:

"Back away from the body slowly."

"Do not swallow that baggie!"

"Put your clothes back on, ma'am."

In the past, when I've disobeyed the commands of police officers, I've ended up maced, in leg irons, or with broken ribs. In my defense, I'd just like to say that I would probably have obeyed the orders cheerfully had I not been high on PCP at the time. But ever since I quit doing dust back in 9th grade, I've had almost no trouble with the police whatsoever. Well, significantly less. A bit less, anyway. Okay, less.

So when Frankie The Cop recently told me I had to make a full confession, I felt I had to comply. He wants me to confess to 3 things I do that others don't know about. The problem with this is that I've pretty much spilled my guts here on this blog, so I had to think long and hard (yes, with the same tiny brain I've been using all along). Haven't I already told you guys every Thing Wrong With Me? (Well, the first 90 out of 100, anyway.) But again, I'm obedient when it comes to orders barked at me by cops. So here goes. Please, officer, don't hit me with your nightstick again.

1. My friend Becky and I used to shoplift when we were in high school. We didn't really need any of the stuff we stole--mostly it was clothes, and neither of us was destitute--we just did it because we were bored and it was fun. We probably only did it for about a year, if I remember correctly--at some point it occurred to us that we might eventually get caught and then sent to a women's penitentiary where we would become lesbians and develop an appreciation for flannel shirts and corduroy pants. So yes, I was a teenage criminal. But don't worry, I'm not going to hell for that. There's a long list of other things I'm going to hell for.

2. This is almost too silly to confess, and up til this moment, I've never told anyone about this except my husband (who looked at me like I was an escaped mental patient): I have a paranoia about being knockkneed--meaning I'm afraid that my knees are too close together. All my life since the age of about 13, I have consciously stood in such a way as to push my knees apart while leaving my feet together, in an effort to create more space between my knees. Not only do I do this when I'm out in public, but I also do it when I'm alone and no one's watching--every day, all the time. Here is a picture of me standing the way I would naturally, if I weren't so freaking paranoid, and a picture of me pushing my knees apart like I normally do. 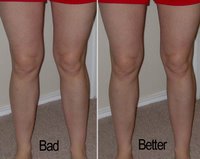 I know what you're thinking--that I have too much free time if I'm spending my energy examining the distance between my knees. Either that or I'm deeply, unbelievably self-absorbed. Yes, and yes.

3. Sometimes customers at work show their appreciation for us by baking something--cookies, cake, banana bread, etc. These offerings go on the table in the breakroom, where employees can partake of them at their leisure. We rarely know which customer made a particular item, because it's not like anyone goes to the trouble to label the food; it just gets unceremoniously dumped on the table by whatever employee happens to receive it. I eat this food. I know a lot of you are thinking you wouldn't eat mysterious baked goods because you don't know if the maker of the item washed her hands, or if she lives in an abandoned RV with 35 cats, or if she has hepatitis C and a flesh-eating skin rash, etc. I think about those possibilities each time I pick up a mystery cookie, I really do. And then I think, "Yum, cookie." Now, in my defense, I will say that I do make a judgement call based on the appearance of the gift. If it's cream cheese cookies in a festive holiday tin that's streaked with bloody fingerprints, I wouldn't eat that. If it's blueberry muffins with enough strands of human hair scattered on and around them to make a wig, I wouldn't eat that. If it's a loaf of pumpkin bread with a mouse tail baked in, but protruding halfway out, I wouldn't eat that. The tail, I mean. I'd eat the bread.

So there you have it. Three more reasons to be glad you're not me. Thank you, Frankie, for further alienating me from my people. I'll probably grow old and die alone like a former child actor. Is that what you want?

Email ThisBlogThis!Share to TwitterShare to FacebookShare to Pinterest
Labels: The internet--it's more than just pornography

I found that when I attempted to stand with my legs apart so that my thighs wouldn't look so close together, small children came up missing :(

That, and I had to fend off the winos seeking shelter from the cold.

Yeah, when I met you my first thought was "Pretty girl... Shame about her knees."

That was followed closely by "Jesus how do you make her shut up???"

After the knees confession you may NEVER call me "freakshow" again.

I used to sleep with my nose taped up to my forehead. I was afraid of having a hook-shaped nose like my dad. Of course, I still ended up with dad's beak.

Those are pretty strange confessions there. Bu thanks for sharing anyway. LOL

What, you're not gonna bust any of your adoring fans?

Leesepea: I'm not a cop, so I hardly have the authority to beat a confession out of anyone. Well, except my husband. But if you've done something heinous, I encourage you to turn yourself in on your website. I will be there to gasp in horror at your transgressions.

Karla dear, your knees are quite lovely, and it would please me to suckle them.

However, in light of your shoplifting past, I've forwarded the URL of your blog to the fine folks at the FBI. If I were you, I'd book a one-way flight to Mexico and lay low for a few years.

KB, KB; your always up to something little lady. :) Hey you guys have a Happy New Year over there, Texas Style.

Fill up those 10-gallons with beer and live a little.

I once heard a man say to the bartender that he wanted him to put together a drink that was a "legspreader".

You almost make me want to move back to Texas just so I could stare and gawk at you.

Almost, but not quite.

I don't know what the appeal to shoplifting is to teenage girls.

About your knees, if we comment that you look normal you'll think to yourself "Shut up, they are....looook!!" IF we tell you that indeed you are knock kneed you'll think "bitch, look at yours!!" haha.

You are indeed brave about the baked goods. I always wonder if anyone eats the bread that visine was poured onto? You'll know them by the trashbags they wear home. ;-)

Ciao crazy lady! Happy New Years to you & yours. Many more heinous years to come.

Bah! If it smells like it may have been food in the last three weeks, eat it. You may well need the trash bag within minutes, but antibiotics usually cure whatever happens before dehydration kills you.

Bless you, your knees, and your sense of humor in 2K06!

are you sure every one is looking at your knees, probably not. men do not think about knees much. even when i was young i did not give them much thought.

Hey Karla
That was such a cool confession ,
I knew I picked the right one to bust.

You are great for going along with it.
Thank You

Ewwwwwwww please don't eat any hairy food. I too eat things that are baked by my customers, and without much prior examination. I am so afraid that one day I will find a hair or some other disgusting thing in those treats, but that's what make sit so exciting...you never know what you might get ....LOL

Your courage regarding anonymous baked goods is admirable...I wish I shared it!

Between paranoia and the fact that simple carbs go straight to my male menopause pouch, however, I will pass on the pastries of mysterious origin...

However, it is worth noting how much the above decision PISSES PEOPLE OFF...I think they want affirmation that, "Yes, it is okay that YOU are eating the mystery pastry....'cause, see, LOOK! I AM EATING IT, TOO!"

Some people get pissed when I won't eat their peanut butter cookies, even after I tell them I am allergic to peanuts and might die! In that case, it's 'cause they can tell I am a bad liar...but I am NOT a bad allergic-reaction faker, so don't push me to eat the cookie!

you are out of your mind.

Your knee thing is bizarre but I can sorta empathize...I can't STAND (no pun intended) to have my knees touched. It makes me sick to my stomach.

By the way, who does one have to &*@# to get put on your blogroll? Wombat?

Yes, Jessica: If you blow Wombat, I will definitely put you on my blogroll.

See how easy that was?

Ok. the leg thing is a little picky. I think your legs look just fine. Quit being over critical of yourself!

The food thing. It's understandable. I have the same standards as you on those concerns!

Say, Wombat - you comin' through St. Louis anytime soon? I've got to earn my link.

I wouldn't eat the tail either.

Ha! I can so relate to the eating the food stuff. The only problem is, that since I work with kids, they've usually had a hand in the baking, and I've SEEN the crap these kiddos have on their hands!

That entry was sexy. Anyone up for some dental sex? You can come to my box under the bridge!

geezz...look at those knees! skinned up from being on them? LOL, just kidding!

You should see me with seatbelts and the reaction I get sometimes...

Aw, Karla, poor widdle mousy gave up his tail and you're going to let it go to waste? That's cold, real cold.