When Jake Grows Up

Every parent wonders what their child will be when he or she grows up. Oh, parents try to be diplomatic about it, saying things like, "I'll support little Adolph in whatever he does," and "I just want Ghenghis to be happy, that's all." But secretly these parents are probably hoping their kid grows up to be the president of the United States, or at least the president of a fast food conglomerate. Parents rarely consider the more realistic possibility that their little munchkin will grow up to be a transvestite hooker or an IRS agent, but no one can blame them for hoping for the best.

Personally, I'll be happy if Jake survives into adulthood with me as his mother. Beyond that, anything else he manages to accomplish will just be a bonus. But here are some of the possible routes my son could take:

He could be a bodybuilder. 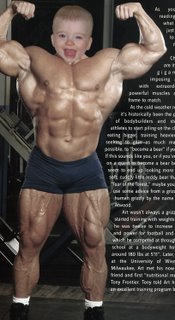 This would be handy for me, because there will come a day when I'll need someone strong to hoist me out of my hospital bed and give me a sponge bath, and change my support hose for me. Bodybuilder Jake would be ideal for this. Plus, big-muscled guys look great with a "MOM" tattoo on their arm, which Jake would definitely want because, you know, I'm so great. In fact, I'm thinking of getting him one of those for his 1st birthday.

Or, he could be a prom queen. 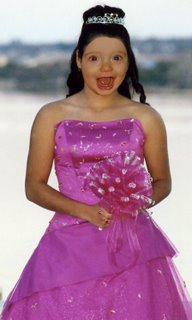 Or prom king, which I suppose would be my preference. However, since I missed out on having a daughter to dress up in cute little outfits, it would be kind of fun to go with him to pick out a prom dress. And we could sit side by side in the beauty salon under our hair dryers and talk about celebrity gossip, which would be a great bonding moment.

Or, he could be a religious leader. 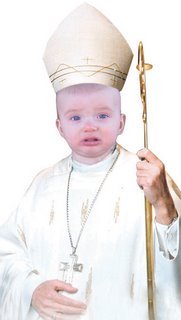 Not the child molesting type of religious leader, nor the money-grubbing type who squeezes every last dime out of his followers and builds a lavish country estate complete with a waterslide and several statues in his image. But the kind of religious leader who occasionally heals the sick and causes the crippled to jump out of their wheelchairs and walk again. That way, I would be very powerful at the old folk's home. Those old biddies would be falling all over themselves trying to gain my favor so I could send my big shot religious leader son to cure their gout, incontinence, bed sores, and whatever else ails the elderly. Plus, he'd be there to read me my last rites when I kick it.


But then again, he might end up on the cover of a magazine. 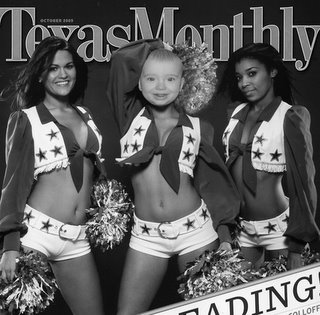 That would be really cool because then I could push my walker up and down the halls of the old folk's home waving the magazine and shouting, "Ha! I bet none of you old bats have a kid who's on the cover of a magazine!" Of course the downside, at least in this particular scenario, is that the less senile among my elderly companions would probably point out that my kid looks a little fruity in that cheerleading uniform. But I'd just pull that common old person's trick and act like I couldn't hear them. Then I'd pee a little.

That, is pretty funny, I cant believe you did not think of Astronaut. What parent does not want there kid to be an astronaut

i think he looks great in the uniform.

That is fucking awsome.

Sorry there is just no better way to say it.

I can clearly see Jake at about age 16, handing prints of those pictures to his state-appointed shrink and saying "It was right about here, at this moment, that my mom fucked me up for life..."

No offense, but your kid has a sweet rack.

Karla, you know when Jake is some big Hollywood star someday, all of these pictures are going to be dredged up by some reporter with way too much time on their hands and ruin his blossoming career. Way to go.

Lady you crack me up. But I can clearly see Jake is going to be a daytime soap star and then wind up on Dancing With The Stars.

Holy crap, that's funny! But man, you better hide these photos from Jake as he gets older or he's going to be pissed.

"No offense, but your kid has a sweet rack?" That is some funny shit, AnonymousCoworker. I actually snorted when I read that. Too funny.

Margo of Mystery and Mayhem said...

It might not be a bad idea to start a list of things for Jake to bring up with his therapist later in life, because there may be a mind bogglingl number of issues.

Really poo is better than pee. I got behind an elderly lady who was leaking poo outta her pants while I was at the Post office. You can bet she got her way.

Ha! Your photoshopping skills are vastly superior to mine. Those are hillarious! But I agree, hide those from him so that he doesn't develop a complex.

I peed reading this piece.

I peed for the honor of your son. I peed for children everywhere with parents who photoshop their kids' heads onto cheerleaders. I peed for catholics who now must live with a desecrated photo of their leader. I peed for the mental professionals who are, no doubt, beating feet to your door or hounding you via e-mail to let them be the one to garner the fame of having healed your clearly-tortured mind.

I laughed, I cried.

You rock the photoshop. I just ordered mine and will be putting my loved ones heads on hookers bodies in 3-6 business days.

I wonder how your son will feel when he finds out that half of his potential careers involve him participating in a gender modification. I suppose that, at some point, even parents of transvestites have to realize the awful truth. I would say it's not your fault, but from this post it clearly will be.

The look on his face in the pope picture is the best! How appropriate...

Oh, and I peed a little when I read this!

Hilarious. I think the funniest part though is that you took the time in Photoshop to mock those photos up.

I think I'm going to have to vote Jake for prom queen.

I just love you.

You are so twisted.

ROFL That is really funny

We're hoping Trixie grows up to be a transvestite hooker who "stings" johns for the IRS.

It was kind of cruel to name him, "Trixie."

My son wants to be a publix bagger. Yikes!

you seem to have a high belief that hes going to turn gay.

The President of the United States makes crap money, at least for the hours he puts in. Much better to be the president of a fast food conglomerate.

*OMG* could not quit laughing. i have been catching up on a lot of your previous posts...i'm new to your blog! my favorite is the prom "queen". while some parents create a savings account for their children's college education, you and your hubby might wanna start one for his psychologist / psychiatrist / therapist, whatever you wanna call it, 'cause chances are he is gonna be under the care of some kind of mental health professional.
p.s.: you've got me hooked!
happy friday and all that jazz!

He doesn't look very happy as the pope. Girls are fun to dress up. My first child was a boy, then my second a girl. I painted her nails, dressed her up... my husband said, "did you want a baby, or a BARBIE?"

I wish you would quit vilifying Ghenghis. He's my cousin, comes over to play sometimes, and he's a damned good dog. And yes, his name is Ghenghis F'ing Khan. The children don't know his middle name.

My daughter grew up to be prom queen and she has sense of humor just like you. How scary is that? It's going to be just brutal for Jake growing up...I can see that now, twisted Mother, gender confused baby pics, good lord woman, what are you doing to that child? Never mind it's probably what was done to you, except I'm sure your Mom didn't have access to Photoshop. LOL

If there was ANY doubt that you would not win for most humorous blog, Karla, you have strongly secured it now!

You are ridiculous! And I fucking love you.

Seriously though, my advise, contrary to the others, is that you hide any pictures of YOU. Because by the time Jake is old enough to blog there will surely be more depraved things he'll be able to photoshop YOUR head onto.

You are so fucked lady. He'll be using this embarassment as barter to get what he wants. Let me know when you buy him the corvette, If I'm not too wrinkly, maybe I can be the stripper he'll surely demand as well.

What's scary is the apple doesn't fall far from the tree... ;)

he is going to go to MED school, become a psychiatrist and you, my dear, will be his first case :)

Oh, you are my kind of people.

You're my kind of people, too.
We should get our kids together so that we can be in-laws. (I have a boy and a girl...so which ever way Jake ends up leaning).
We'll be showing up for your house in the camper around Christmas time.
I hope you were serious about letting us move in with you!

This is so funny! Not sure which is my fave, the prom queen or the pope.

My daughter wants to be either an astronaut, a veterinarian, or a waitress at Red Lobster.

Ack, could she at least pick a *good* seafood restaurant?

What ever it is, I'm sure he'll be GREAT!

You could always use the old "MUMBLER!" phrase. I mean, you did forget to put in your hearing aids and all...

I have to ask, why is Jake a sad priest but a happy everything else when he grows up?