You've got to admit, they DO look suspiciously alike. 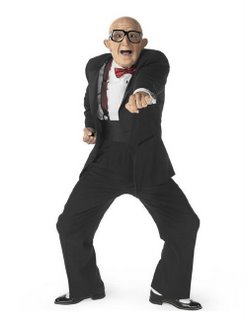 The old guy in the Six Flags commercials looks like a feisty, fun-loving fellow, prone to busting out in a joyful jig at the drop of a hat, but watch out, pal. He could whack you just as easy as he could ask you to dance. 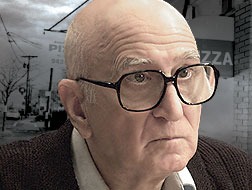 The guy is truly manic depressive. One minute he's doing cartwheels to a zippy tune in front of a roller coaster, the next minute he's shooting Tony Soprano in the belly. I can't explain why he's so moody one day and so ecstatic the next, but I know this: The guy really enjoys himself at amusement parks. That's where he should stay. If you ever run into this guy while you're enjoying a day at Six Flags, be respectful. Don't try to cut in line in front of him for the Superman Tower of Power ride. He's just there to blow off some steam, but he won't hesitate to blow your head off, just to prove a point.
Posted by karla at 1:42 PM

Email ThisBlogThis!Share to TwitterShare to FacebookShare to Pinterest
Labels: The internet: A complex maze of literary sewage pipes

Believe it or not, Chianese is a pretty good singer. Check out his CDs on Amazon. He's legit, in that old timey, Italian grandfather-cabaret style stuff.

Great minds think alike... I posted about this a while back last September... only I went one step further than Chianese:

Oh my god. You are so right. Scary. But then the dancing Six Flags guy creeps me out anyway.

My husband laughed hysterically when Junior shot Tony, but not as much as he laughed when Junior hit is ex-girlfriend in the face with a pie in season one for blabbing about his ... prowess.

My family went to six flags a couple of summers ago, and that damn guy was on posters, cardboard cut-outs, etc. all over the place.

And the song. THAT song that he dances to in the commercials. It was playing EVERYWHERE.

I wanted to get on the rollercoaster, take off my safety belt at the top of the tallest hill, and leap off. That or impale myself through the ears with the straw from my souvenir cup.

I LOVE the creepy dancing Six Flags old dude. Whenever he shows up on TV I am utterly transfixed. Just thinking about him has locked that damn dance song he does his thing to into my mind. Thanks.

I hadn't thought of that...but I do have a patient that threatens me with bodily harm and/or a horse head in my bed if I continue to torture/treat him. He also has loose false teeth, so I can't help but giggle during said threats.
AND BTW, it's TISH, not TRISHA, as you casually said to Hoss...didn't think I'd hear about it, huh? Yea, well, you have earned a swift kick in your perfect booty whence we have dinner with the old man.

How many times has he gut-shot your husband?

OMG...how the hell did I NOT see the resemblance before? freaky!

That is so funny. Same glasses, too!

You are right! That is so funny.

If I had to pretend to be all happy and bursting with energy all day, by the time I got home I'd be all moody and looking to gut shoot people too.

That is truely a "separated at birth" comparison. Very good. Like the others, I never picked up on the resemblance.

I won't have to worry about running into the geezer since our Six Flags completely sucks.

I thought I recognised that face. He's so mean in Sopranos. When will we ever get to see it again in the UK? Nothing here can compare.

This is reminding me: I need to finish a game of Whack-a-Mole with my daughter.

Note to Karla: No more photos of you in the morning before you put on your make-up.

Ah, the six flags guy. My husband used to think he was real (as in, a real old man vs. a young man PLAYING an old man)...he would say, "I can't believe that guy doesn't get more gigs, he's amazing!"

I like picturing him as the Soprano guy instead.

Every time I load your site, that nagging Six Flags song pops into my head.

THey look amazingly alike...and by the way...The Sopranos sucks this season, I couldn't be more disappointed :(

I don't like either of 'em. I think it's the glasses. And the manic dance moves.

hey i like that annoying six flags song. lol.

Dude, do you know that the Six Flags dude is really a chick?!?! That means Junior must be a chick too! Son of a Bitch! This stuff's twisted! Next thing you'll tell me that Big Love's really about Mormonism and that he's not just cheating. I'll have none of it!