CAUGHT in the ACT!

You guys probably think I make up a lot of the stuff I write here. I'm not sure if you think that because you're just a suspicious lot, jaded and bitter from being ripped off by drug dealer after drug dealer through the years, or if it's because you have such a low opinion of me that you think I need to make up wild, fantastical tales just to get attention, but I can assure you, everything I write here (with the exception of about 98% of it) is totally true.

Case in point. Not long ago I wrote about how my devil child is fascinated by the drain in the bathtub, and refuses to believe that it's not a portal to another world filled with toys, kitties, TV remotes, bite-size chunks of cheese and other things he loves more than he loves his mommy, which is why he makes it his mission to attempt to slither out of his baby tub and inspect it at every opportunity. When I wrote that post, I included a photo of Jake in said baby tub, but did not have a photo of him actually in the act of slithering. Now I have it: Photographic proof that at least a portion of what I write here is not total B.S: 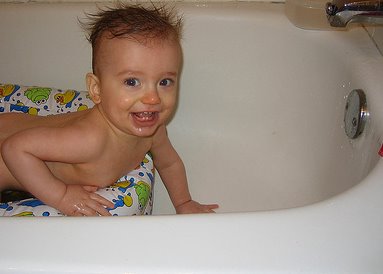 Notice the crafty look in his scheming eyes as he makes his move. The kid's a loose cannon. So now you see my dilemma. Allowing a soapy infant to scrabble out of his tub at will is a bad idea for several reasons:

1) He could bonk his noggin on the porcelain of the tub, resulting in a cranial fracture, or possibly a huge red bump like the ones I've seen in Bugs Bunny cartoons.

2) Not having fully mastered the art of slithering, he could slip and wind up face down in the water of his baby tub, causing him to drown, or worse, cutting his bath short before I get a chance to finish chipping the grime off of him.

3) He could discover that the drain really is a portal to another, better world filled with toys, kitties, TV remotes and bite-sized chunks of cheese, but that, unfortunately, he is too fat to fit through the portal. He'd get stuck halfway in the drain, with his soapy derriere sticking up and his chubby legs waving frantically. That would render my tub pretty much useless, since that would stop up the drain. At the very least, it'd cost me a house call from a plumber. And half an infant.

So I can't just have the kid running amok in the tub. I need another, better method of de-stinkifying the little bugger. I've been brainstorming a few ideas, which I will share with you now:

1) I could put in him in the backyard and spray him with a garden hose. The upside: No mess to clean up afterward. The downside: His ear-splitting screams might arouse the suspicion of my neighbors, netting me yet another visit from Child Protective Services.

2) I could spray him down with Formula 409 and wipe him with a kitchen sponge. The upside: Formula 409 cleans even the toughest stains. The downside: Central nervous system damage, possibly resulting in hair loss and reduced motor skills.

3) I could put him in a little red wagon and send him through the drive-thru car wash at the corner Exxon station. The upside: Cleaned and dried in under 3 minutes. The downside: I'd probably be the one who has to pull the red wagon through, which would mean we'd both be getting a bath. And since I vowed never to wash my hoo-ha again after sleeping with Steven Tyler backstage at an Aerosmith concert in 1997, I can't allow that to happen.

So those are my options, and none of them are total winners. If you have any better ideas, please share them. In the meantime, I will just stop bathing him altogether. The upside: One less chore for me to do! The downside: He'll eventually smell like a dumpster full of severed gopher feet. So any advice you have will be appreciated.

I think I know of something (hoo-ha) that already smells like a dumpster full of severed gopher feet. So what's one more?

kids, such a pain!! have to bathe, clothe,feed... they always want or need something!! i cant wait till mine are grown and gone so i can drink a whole "propel" water without the little buggers trying to steal it!!

Steven King's "IT" at bedtime oughtta do it. Aughtta? Otta? Nope, lost all meaning.

...and Gina, I'm glad to hear I'm not the only one who has the type of kid who insists we "share" the bottle of blue Gatorade (and I don't care if it does have an auto-backwash-stopper - that's MY drink that gives me the vague sensation that I'm some sort of athelete who's about to spring into action at any moment).

I have a six pack - I just lost the plastic ring thingie that holds it together.

What were we talking about again?

You could install one of those jumpy/bouncy kid swings in the tub...then spray him down...the neighbors won't hear a thing and he won't be able to slither away...

I say go for number one-hey, if you haven't been arrested yet, I think you're pretty much safe by now- what is this, Child Protective Services visit #1845785? :D

Also, I don't even want to know how you know what a Dumpster full of severed gopher feet smell like.

He'd get stuck halfway in the drain, with his soapy derriere sticking up and his chubby legs waving frantically.

Yes, but that would provide a rather convenient means of storing the scrub brush.

Kids ar the best aren't they!

You always make me laugh!

FYI - Get a spout cover to prevent him from hitting his head on it. I never used one with my daughter, but she wasn't wild and crazy in the tub either. I've had one on ours for my son since he was 8 or 9 months (he's almost 2 now). There have been so many times it has saved his noggin! Ours looks like a duck :)

I just quit bathing my son once he outgrew his infant tub.
I just sprinkle extra baby powder in his diaper to muffle the severed gopher feet stench.

They're portable, convenient, and come in various scents (nice ones, not severed gopher feet).

Toss 'em in the dishwasher. The jet dry will help keep him spot free...

I personally vote for the red wagon through the car wash. Maybe you can put the wagon on one of those automatic conveyor belt washes, and then you wouldn't have to pull it. Plus, think of how much fun it could be for Jake!

I vote for covering up the drain with one of those white plastic thingies or a washcloth. Maybe he'll ignore it then.

I have one word for you: Febreeze

Didn't you once show pictoral evidence that he fits in the washing machine? That said, I'm sure it will work, but keep the lid up I suppose. We don't want him suffocating in there.

string some car trees around his dangly parts. you know, ears, fingers, etc.

I've used the hose method outside during spring and summer for years now. The neighbors seemed to get used to it.

Wrap him in dryer sheets until he is 18.

Works for my dealer.

Karlababble, I hope you're still blogging for the next 20 years! I can't wait to watch you experience every little phase of their lives. Well, not watch, but ya know... READ ;)

Best advice I have is to get a dog. I didn't have to bathe either of my kids but maybe once or twice a year....The dog licked them clean after every meal, so really my kids were getting baths 3 times a day unless they had snacks...and dogs make great vacume cleaners too, cutting down on even more chores! Seriously! Get a dog! Stacie

I'm sure you can tie a rope to the wagon that's long enough for you to run through the car wash and safely pull the wagon through on the other side so you don't get wet.

That is a very impressive slither for one so young...

Hmmm, in my house the only worldly wonders lurking past the drain are the $20,000 worth of lost earrings encompassing 10 years. Which might be worth recovering, but I am too lazy. Bite-sized cheese, though- that's worth going after!

I guess the threat of "the other kids at school are going to start calling you stinky if you don't take a bath" won't work yet... try a pressure washer. Those are quick and effective. Also, he'll have no skin left, which will negate the need for future baths.

Get one of those big plastic balls with the handles and foot loops for kids to roll inside and fill it about 30% with soapy water. A quick downhill roll and Jr is all squeeky clean.

Let him be, you can make more.

I know this is a bit off subject, but I'm just curious: do you suppose severed gopher feet smell significantly worse than still attached gopher feet? I'd imagine it would depend on how long they were in the dumpster and the average ambient temperature, but you know, ruling out decay, do you think attached ones might smell better or worse?

It's just that you make me laugh. And it's a good thing. So thanks.

I'm going to say in the washer with the whites. ;)

He is so incredibly darling. And those eyes are just daring you to look away!

He's adorable!! Not going to be able to stuff him into drawers anymore. And lookit those teeth!!

As soon as my kids were able to sit up unaided, I ditched the baby tub and got a non slip mat for the bath and let them spalsh about in a few inches of water - they LOVE it!! It also saves a whole lot of bathroom hassle and, let's be honest, lugging out that big extra bath is a pain!

Just wait until he discovers the joys of aiming a pee stream at cheerios in the toilet.